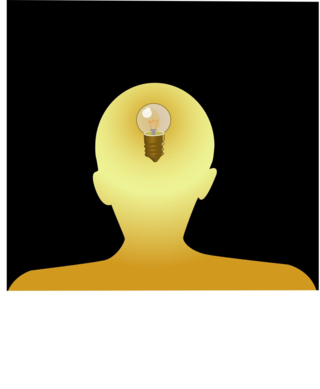 This is you, with all your ideas aglow in your head.

It's a shiny new year and many of us have worked hard to note goals and dreams for 2014.  No matter what your writing goals, they are all dependent on one thing: a plethora of ideas.  So I thought it might be a good time to look at ways to cultivate them.

Observation. Open thouest eyes and gaze upon the world.  We're too often so wrapped up in ourselves that we don't see what's right in front of us.  As Deepak Chopra once said, "All our misery comes from our own self importance."  I would amend that to say: "Our lack of writing ideas comes from our own self importance."  Quit worrying about yourself and pay attention to what's going on in the world.

Listening.  We all talk too damn much. Open your ears and listen to what's going on around you–that dialogue between the two cowboys in the corner (hey, I live in Oregon, we get us some cowboys, especially on the east side of the state), the dialect your neighbor speaks, the cadence and flow of your minister's sermon or your professor's lecture.

Making connections. It's been said (by who, I don't know) that creativity is the combining of two disparate things that might not otherwise go together.  In other words, it's about making connections.  So it stands to reason if you put two odd things together you'll come up with something new.  You know, like Jane Austen and Kitties, or Jane Austen and Zombies, or…oh never mind.

Ask What If.  The tried and true writer's question: what if?  Ask that question over and over again and see what happens.  What if my protagonist jumped off that cliff?  But there was no water below as she thought?  And then she survived but she was in the middle of a desert with a broken leg?  And then a lion came?  Well, okay, the last part doesn't make sense, but that doesn't matter–just let your brain rove freely over the what ifs.  You never know what idea might be tweakable for the perfect plot point.

Write Things Down.  I find, over and over again, that ideas comes to me in the middle of the writing process.  I think I don't know where I'm going on the page, but then I write one word and then another.  And before I know it, without even thinking about it, my fingers are flying across the keyboard with idea.  So make yourself start writing, even if you think you can't.  Oh, and also? Please don't forget to write an idea down as soon as you have it.  Don't tell yourself you'll remember.  Because you won't.  Smart phones are great for this, because admit it, you always have yours with you so you can make a note on it.

Steal Things.  But don't plagiarize, please.  When I say to steal things I mean it in the metaphorical sense of the word–as in there's nothing new under the sun anyway, so your take on the two sisters, one of whom is ugly and one gorgeous is going to be different than mine.  Go ahead and steal that idea for your novel, by the way–I dare you to.

Vary Your Routine.  Drive a different route to work or cook a new dish for dinner.  Better yet–go out and try a new restaurant.   Dance the Macarena or sing sad country songs.  Watch a foreign film that makes you feel stupid because you don't get it or try a TV show you've not seen before. Take a hike, visit an art gallery–you get the idea.

Have a Sense of Adventure.  If you head out into the world with the idea that life's an adventure, it will be–and you'll have so many wonderful experiences to write about that you'll never lack for ideas.  I will admit this falls into the age-old dilemma of, do I sit at how and write or go out in the world so I have something to write about?  For me the answer is to find a balance between the two.  Of course, you can have a sense of adventure while sitting at your desk, too.

Those are my ideas about gleaning ideas for your writing.  What are yours?  Please leave a comment.