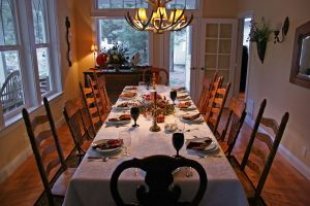 This is a short-ish post, seeing as how it is two days before Thanksgiving, when I host a dozen family members here for dinner, and the lovely Olivia (19 months) is spending the day with me, and the house needs a lot tad bit of cleaning and, oh right, I do have to figure out a few recipes.

I'm deep into rewriting my next novel, and all I can think about writing-wise is related to rewriting, which is kind of an individual thing.  So I've had a hard time coming up with ideas for writing posts lately, which you know is unusual seeing as how we're coming up on eight years of blogging and over 1,000 posts.  Craziness.

But, upon further reflection, I did realize I had something of minor brilliance to say.  It may even be major brilliance–it all depends on if it resonates with you or not.  Here's the story:

The other morning, 5:30 ish* and I'm working on my rewrite.  I come to a part I'd dreaded, because it involved the way one of my main characters, Jack,  reacted to a situation.  Readers commented they didn't believe his reaction, given his actions earlier.

What's the obvious fix here?  Why, give him the opposite reaction, of course.  Which is what I had figured I'd do in all my rewrite planning.  But as I started making the fix, it didn't work for me.  Didn't feel right.  Didn't seem like something Jack would do.

So I got up from the computer (actually I sat there frustrated for a few minutes) and took a shower. And the answer came: Jack doesn't have to have a different reaction, he just has to have his current reaction challenged by the other characters and thus explain his reaction.

In other words, what I needed to do was make it work on the page.

This, my friends, was following the middle way.  It's the sometimes circuitous path between two black and white option, and it comes to us not just in writing but in life.  You look and look and look at an obstacle and can only see it as something barring your journey.  But then, suddenly you realize you can just go around the damn thing–and get back on your road.

I had a counselor once who called this grace.  And that's what it feels like, doesn't it?

Have you had moments of grace in your writing or life recently?

*I've used "ish" twice in this post.  Last week, I was having lunch with a childhood friend (we grew up around the corner from each other) and we agreed that both of us had the same laidback attitude toward life, which she attributed to being the baby of the family.  She said–and I love this–that her favorite word is "ish."  As in,  soon-ish.  Or later-ish.  You get the picture.  Thus, the preponderance of the word "ish" in this post.