My grandfather, who died before I was born, was an author. 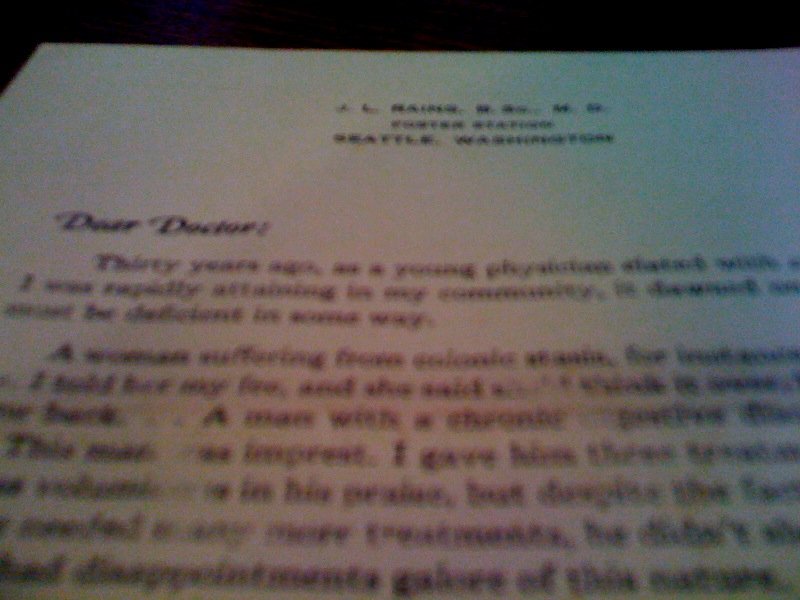 I didn't know this until yesterday.

Not only that, he marketed his book himself, and wrote some pretty awesome direct mail copy to sell it. (You can see some of it in a brochure he wrote in the photo above.) If he were alive today, he'd be an internet information marketer, for sure.  He'd be harnessing the power of the interwebs with gusto!

Jesse Lewis Rains was a doctor, first in Grangeville, Idaho, then Oakley, Idaho, small towns which are still really, really small towns.  I know, I've been to both of them.  My grandfather was a doctor and a Presbyterian.  Nothing wrong with that, right?  Well, if you lived in small towns in Idaho there was.  Because in every small town across the west you'll notice one thing–a Mormon church.  In some of those small towns, the Mormon church is the only church in town.

Thus the problem with being a Presbyterian doctor.  Since my grandfather was not Mormon, nobody would use his services.  So off to Seattle they moved.  Specifically, a small town south of Seattle called Foster, currently the location of the sprawling Sea-Tac mall.  (When I was a child, they razed the houses in the area in order to build the mall and we combed through the ruins.  All I remember is my aunt finding quite a treasure trove of bottles, which she collected, in the detritus).

But apparently, even being a doctor wasn't enough.  He wanted more.  This could be the mantra of the entire lineage of the Rains family, myself included: more!  And so he did what any self-respecting human desirous of more does.  He wrote a book.  His was called Profitable Practise: A Service Book For Physicians, and told doctors how to charge more for their services.

Yes, indeed! Profitable Practise tells you not only how to treat your patient and receive due renumeration for your services–it also tells you how to make your patients feel so grateful to you that they will "boost" for you and send you other patients.  And why not?  Why shouldn't you get a legitimate return from your practise?

This sounds remarkable similar to many of the internet marketing courses I study today, all of which sound the same theme–we deserve to get paid handsomely for what we do.  (And, for the record, I'm not mocking it, because I share this belief for all of us.)

I found my grandfather's book in a moldy old cardboard box I'd hauled out of my Mom's house last year, in the crazy months when my sister and I cleaned out 70 years of accumulated stuff before she died.  Yesterday I finally finished sorting through the papers I brought home from her house.  They are now at least safely confined to protective plastic tubs and stowed in our storage unit.

It was so amazing to me to learn that not only was my grandfather a published author, he was a inveterate writer.  In the box were piles of old torn files, which held several more handwritten manuscripts he apparently intended to publish.  I didn't have time to go through them all, but one of them caught my attention.  He was writing a manual on sex advice!  On one piece of paper was written the following, which I suspect he planned to use for his advertising copy:

You only go through life once!  Why not make the most of it?

I really wish I'd known my grandfather, but he died long before my father even met my mother.  However, having his books and papers allows me to get to know him through the medium I know and love the best–writing.

And what could be better than that?

Oh, and by the way, I've not even begun to delve into the writing from my Mom's side of the family.  My grandmother Hoho, who died when I was three, wrote in a journal every day of her life and I happen to have 50 years worth of her journals in my possession.  To say nothing of every letter anyone ever wrote my Mom, including the ones from her various suitors during World War II.

I love that I have this amazing legacy of writing from both sides of my family.  But my question is: what do I do with all this material?  It seems so vast and overwhelming to me.  Suggestions?  Have any of you ever dealt with written material from your family?  I'm all ears.