An Open Letter about the iPad

In keeping with all the Open Letters coming from Apple and Adobe these
days, I thought I’d piggy-back and send my own in reaction to my new
iPad. Actually, most of this comes from a letter that I sent to my
good friend over at Wordstrumpet. She gave me permission to publish my
private letter to her, in full or part. So, here goes:

Okay, this email is the only thing (for me) that I will be doing
today. After I hit SEND, it's time to work on classes, laundry,
dishes, kids, and so on.

Man o Man, the kids woke me up before 8 a.m. today–both of them
wanting to get on the iPad. My son wanted to play a cool race-car game
and Space Invaders, and his little sister wanted to play with a Jackson
Pollock finger painting program. They both gave me the stink eye when
I told them to go away, that I had to use it.

Actually, I am giving it to my son to play with since I'll be grading
papers all day. Blackboard can be pretty complicated, and it helps to
have a 17-inch screen to see everything all at once.

I am still loving the iPad, along with everyone else in my
family…apparently. But I've only had it a few days, and I've been
way too busy to learn how to use it and outfit it properly. Classes
will be over in a couple of weeks, and I'll be able to dig into it.

Honestly, buying it was a tough, tough decision. It's not often that I
spend $500 on something that I technically do not need. When it comes
to these big purchases, I normally put the family needs first. And I
spent another $200 in accessories. Shipping was free, but there was
$50-ish in sales taxes. So, we are looking at $850 door-to-door costs.

I am thrilled that I did it. I love it, and you will, as well. If you
get the book writing gig, you should go for it.

There is one important decision for you to make and one accessory to
get.

I got the cheapest WIFI model, which was $499, aka: $500! It is 16
gig, and honestly, it's been fine. It holds all kinds of media and
photos, and it has countless space for documents for my fiction. I am
glad that I did not pay extra for one of the other two WIFI models with
larger hard drive space. The WIFI is like my laptop now, i.e.: I get
on the wireless connection in my home and in places that have free WIFI
hotspots, like Borders.

Then, next, there is the WIFI + 3G model. The 16 gig version of this
model is $629. This means that your iPad will work like any cell phone,
i.e.: you can access all of the web features no matter where you are.
You are always online, and/but of course you have to pay something like
a $15 access fee each month.

The Question: 3G or the regular model? It's six of one and half a dozen
of another. I don't do all that much roaming, so, it wasn't an
issue/need with me. But you are on the road a lot, and it might make
your travel life just a little bit easier if you chose 3G. For the
extra $129 will probably bring your thousands of dollars in benefits in
the days, weeks, months, and years to come.

The One Accessory: Without a doubt, you need to purchase one
accessory: the Apple wireless Bluetooth keyboard. Oh, the touch screen
keyboard is fine, Great, actually. I am not using it now because I
knew that this would be a long email. In fact, I think that we writers
push the Bell Curve to the limits with this stuff, and those hours
spent in front of a screen really does require the best investment in
writing accessories. We owe it to ourselves to invest in the best
chairs possible, nice keyboards, a generous supply of good Kentucky
bourbon. 🙂

Seriously, though here's an important thing to justify the purchase of
the keyboard for we writers: At this point in my iPad knowledge, with
the touch screen keyboard, I have not figured out how to locate/use the
arrow keys, and this has been a sort of a pain. Of course, you can
touch the part of the screen you want to move to, but navigating
amongst words gets tricky. The wireless keyboard solves this
problem…and it allows me to see all of my text on the screen, verses
splitting the screen between the text and the keyboard.

Another Accessory: Okay, I was wrong. Another accessory you MUST have
is the cool carrying case. It protects the device and looks cool, but
more importantly, it flips, locks, and creates a comfortable ad-hoc
place to write on it.

A Third Accessory: Crap, I forgot. There is a third accessory. I was
wrong about the one accessory. Darn, with my 45th birthday approaching
in June, you'd think that I'd stop being wrong at this point in my
life, but somehow, I have not forgotten to do that. Who knew? 🙂

Anyway, the third accessory is the iPad doc. It is ESSENTIAL that you
do NOT get the iPad doc/keyboard combo. That is a single device. You
want these things as two separate items. Oh, the single device is
fine, BUT having the items as two things will allow you a greater
degree of comfort flexibility. When setting up for HOURS in front of a
document, every little bit of comfort helps. Oh, the doc is a great
device that acts like a stand for the iPad, and you can charge it as
well. I read a couple of bad reviews about it online, but from my
experience, they are wrong. It works just fine.

I was shocked at how…instruction-less the iPad was out of the box.
Being a full-time technical writer, writing guides and instructions are
big portions of my day. So, I had a lot of expectations with this out
of the box. There was a small card and a cool decal for my car, and
that was it. I was amazed how easy it was to flow through the product,
through the experience of using it. Oh, there's some digital
documentation available, but it really is NICE TO HAVE/KNOW stuff,
verses MUST HAVE info. I plan on buying a book on it…just to suck
all the value out of it I can, but I am impressed and amazed.

Battery Life: Jesus. I have never owned a laptop that lived up to the
promised battery life time. Ever! But this thing does. TEN FULL HOURS
of doing whatever you want. With my laptop, when the battery gets
below thirty percent, I start to keep an eye on it. With this thing,
it's not even a factor.

The Apps blow my mind! First, there's a lot of stuff worth having that
is just FREE. Even the updates are FREE. Wow. And many magazines have
created iPad versions. These are NOT digital copies of their stuff on
the news stands. These are re-envisioned digital versions. Again: Wow!
And the stuff you have to pay for is go great that you don't mind
paying for it. No one is ever upset at paying for quality.

Ebooks! The Kindle is so screwed. I have been looking at the Kindle
and Sony eReader for over a year. I've wanted one, but I knew that
Apple would come out with something better. I was just waiting for it
to happen. It has. 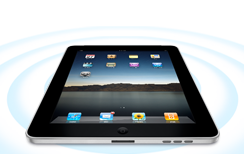 Okay, I gotta go. My little girl is driving me nuts over the finger
paint feature of iPad, and her brother has a race to run in Italy!

Since sending Wordstrumpet this letter, I’ve had a few other
noteworthy experiences with the iPad.

In no particular order:

I purchased the adapter that…almost allows me to watch shows in my iPad
on my television. For $29, the iPad Dock Connector to VGA Adapter
arrived. My common sense should have told me that I would need to get a
cord with two male ends to connect the end of the dock to my
television, but I was too focused on getting the iPad. Anyway, a $25
trip to Radio Shack solved the problem. The video looks great. The
sound plays on the iPad verses on the television. Not sure if that is
suppose to work that way or if I am doing it wrong. More research
required, BUT it works. Nice feature. I get a lot of content from
iTunes that I cannot find over the counter at traditional outlets. So,
it’s nice to watch my favorite PBS and Sundance Travel shows on the big
television whenever I want.

16 Gig. The minimal hard drive space has forced me to be…selective
about what I choose to load. My iPod is loaded with hours and hour and
hours of video and music and audio books, and so much more.

Bringing it to work and using it at my local Borders has been a good
experience. So much better than bringing my heavy laptop and lugging
that around. Easy and portable and great. Although, I think that I have
received the ‘stink eye’ a few times from my fellow patrons in the café.

I had a great service experience with it today. I noticed yesterday
that one of my books from the iBook bookshelf was missing. Since it
cost me $10, I was a bit unhappy. I went online and was able to
schedule a phone call with support. Instead of waiting and waiting, I
indicated online the phone number and when it was best FOR ME to have
the call. And a couple hours later, my phone rang. That was the best
technology-related service call that I’ve ever experienced! During the
call, they helped me remember that I (most likely) unclicked the entry
for that book/author when I sync’d up my iPad last night…while clearing
up hard drive space. I am sure that it will be there waiting on me
when I get home to my laptop tonight.

Note from Charlotte: Be sure to visit Roy's blog, Novel Operation, where he details the progress he is making on the rewrite of his novel.