Yesterday I had jury duty. 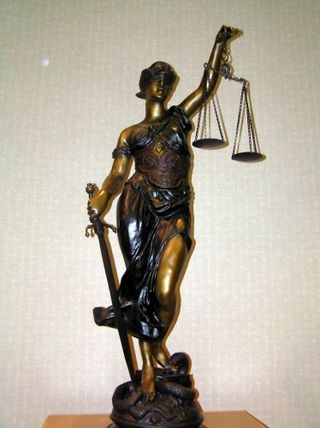 Perhaps it is because I'm called to serve on jury duty more than anybody else on this planet.  This was my third time, and I've gotten excused from service several times before, when my children were little.  I know people who have never gotten a summons, ever. So I was a bit taken aback when I was called yet again.

I told myself that I was too busy.  I had a trip to Nashville planned.  I'm self-employed and can't afford to take a day off.  Yada, yada, yada.  I called the number on the summons and was told I could reschedule, so I did.  Then called again and rescheduled once more.

Finally, the day came.  I had to be in the jury room by 8 AM and if there's one thing I hate, it is having my morning routine of writing and introspection interrupted.  But off I went to the courthouse,clutching  my bag full of manuscripts to read and work to catch up on.

The county really makes jury duty as painless as possible.  You only have to serve for one day, or one trial, whichever is longest.  And there's a large room full of chairs to hang out in, with big-screen TVs, vending machines, books, newspapers, and magazines galore.  I always head straight to the back, where there are tables and chairs.  I found me a good spot and staked my claim to it.

It is tradition for one of the judges to come down and talk to the jurors, and she did, reminding us that the founding fathers of this country thought so highly of the right to a jury trial that they died for it.  This made me feel highly virtuous for a few moments.  Then she talked about how for women, jury duty is the only compulsory service we must give to our country.  By then I was preening, so proud was I.  But when she finished her talk and pressed the button for the cheesy video, I was deflated once again.  I gave up my precious writing time to watch a bunch of yahoos talk about how great it is to be on jury duty?

Once the video was finished, we were left to our own devices until such time as a jury pool would be convened.   I looked around at all the people who had brought their laptops and wondered why on earth I hadn't brought mine.  Even when I remembered that I had made a conscious decision to use this day to get reading done and stay away from my computer, I pouted.  I wanted my computer, wanted to write a blog post, work on my novel, tweet away the day (which I did from my Iphone anyway, but never mind).

I pulled out the manuscripts I had to read, but soon was interrupted by a loud burp.  A plump gray-haired woman in a polka-dot blouse was drinking Coke and apparently it made her gaseous.   It also didn't do much to keep her awake, because soon she was curled at one end of the couch beside me, feet propped on a chair from my table, snoring loudly.  Which was a festive counterpart to the counter-culture type (orange shirt, hair in a pony-tail) who sat at the other end of the couch, head thrown back, mouth open, snoring even louder than the woman.

I muttered under my breath and pondered dark thoughts, like I wouldn't want either of them to serve on my trial, as I tried to read.  Then I looked around at all the people with their computers and started feeling bad about that again.  I needed my computer desperately.  What was I thinking, leaving it at home?  I could be getting so much done.

I started obsessing about what would happen if I got on a trial.  I thought about my Friday, the plans I had for finishing projects, the appointment I had.  I started figuring out options for making sure I wasn't chosen for a trial.  My daughter told me to tell them I loved guns.  A friend on Twitter told me to tell the judge I had diarrhea.  Another friend told me just to say I'm a writer, that that gets them every time–attorneys don't want free thinkers.  So I pondered all this and then my brain looped back to how horrible, how utterly awful it would be if I had to serve on a trial and take another one of my precious days. Because, you know, I am important.  I am a writer with things to do, brilliant words to commit to the page.

And then, something happened.  Either I got sick of listening to this endless drivel in my brain, or my brain got tired of providing it to me.  I sat back and realized that no matter what, it would all be okay.  If I got called for a trial, I'd work late, or work on the weekends to get things done.  I'd rearrange my appointment.  All would be well.  This was only a very short time out of my life and it was just fine.

Ah, the sweet release of letting go.  I went back to my reading and finished two manuscripts in rapid time–for such is the power of focus.  I had a thought about a new novel I'm fooling around with and wrote three pages on the legal pad I'd brought.  I was so wrapped up in my work that it was a surprise when I looked up from it to see the gray-haired burping lady gazing at me.

"Have they called anybody yet?"

"No, they haven't," I answered.  And I realized that it was nearly 10:30, and every other time I'd been on jury duty, several groups of potential jurors had been called by then.

A few minutes later, the jury clerk addressed us from the podium at the head of the room.  All eight trials slated for that day had been resolved in one way or another, she said.  They wouldn't be needing any jurors that day.  We were free to go.

The stunned silence that ensued was quickly followed by a rush to the door, as if everyone was thinking the same thing–let's get out of here before they change their minds.

And so I was home by noon, and I had time to go grocery shopping, get some writing done, write a blog post, take a walk.  And as I walked and thought about my day, the thing that stood out in my mind was the moment of letting go.  The minute I quit resisting and accepted the situation as it was, I got everything I wanted–the chance to focus on my work, the opportunity to leave early and go home.

Give it all up, get it all back.  I first heard that in a book written by Alan Cohen, and I often quote it in my Writing Abundance workshops.  And yet, every time I am shown the power of letting go, I marvel anew at what an amazing tool it is.

The same rules hold true in writing: put it all on the page every time you go to it.  Don't hold back.  Give it all up.

I promise, you'll get it all back, and then some.