Please welcome guest poster Casey Stohrer to the blog today.  Casey is a musician in Nashville and she so happens to be a student of mine, too.  It's hard to predict which is going to happen first–acclaim as a writer or a musician.  Either way, it will be well-deserved.  Stay tuned to her up-and-coming career! 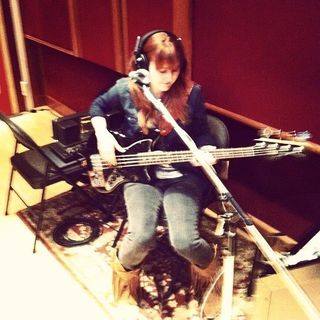 Casey in the studio

Bullshit is subjective. When it comes to creative endeavors, anyway. Maybe all that taste is, is how much B.S. a person can tolerate. While an artist can project their beliefs on other art, they must also learn how to project it onto their own work. Part of creating is also identifying your own stinky turds and turning them into manure for the promising flowers of your sick imagination (case in point).

I write essays, articles, poems, short fiction, long fiction, medium fiction, research papers for lazy, rich college students, you name it. I also started writing songs about six years ago. The dichotomy between writing fiction and music makes my brain do happy dances. It also drives me insane. Sometimes I have dry spells in my "regular writing" and switch to just writing songs for months, and vice-versa. There is enough of a contrast between the two forms that I can "steal ideas from myself” and keep things funky and fresh.

I started to learn bass. I'd played guitar for years, but understanding the role of a bass was something else. Learning to play in a group was something I'd never even thought about. “A good musician knows how to play, but a great musician knows when not to play.” I've heard this saying a thousand times, and I can't tell you how true it is. Playing by yourself, creating anything by yourself, is of course the truest thing you can produce as a sentient being. You are uninhibited and natural. What you are trying to do is be as honest as possible. To yourself. And that is all fine and good. But creating is also an attempt to connect with other people, and that's when you have to learn how to cut and paste and rewrite and overdub. Time and space are intangible until they are needed.

How many times have you seen a crappy band play live? To me, a band is bad when the players have no regard for one another, and just (as I lovingly call it) jack-off all over the place. They seemingly have no idea where they are in the song. The guitarist might be soloing in a way that meshes all wrong with the melodies of the bass player. Or a drummer is playing too many fills, which interrupts the rhythm and throws off the singer. You can play the fanciest, most rippin' solo that anyone has ever heard, but if it doesn't serve the song, then what do you have?

The same goes for writing. James Joyce is a real badass, but sometimes I'm like, “Come on, man.” I like that heavy-hitting, stream-of-consciousness style of experimental writing, but I'm in the business of keeping things as simple as possible. I learned all my artistic philosophies through the Beatles and Charles Bukowski. George Harrison never ripped a 20-minute long guitar solo, but he was still in the greatest pop band of all time. Charles Bukowski never wrote like Shakespeare, but he is the most imitated poet of the 20th century. You know why? Because they knew how to serve the song (or poem). A great musician is not necessarily a technically-perfect performer, but they do know how to listen. A great writer knows how to read. Both Bukowski and George Harrison understood the need for simplicity, to allow negative space to give power to what is already there.

Neo Tundra Cowboy was in the studio last week, and we were recording a sad little country ballad with some honkytonk piano in it. Our guitarist Catfish was laying down this beautiful, jangly piano part, but the producer kept saying it was too much. After some more takes, Catfish had been reduced to playing just the root chords on every fourth beat. It sounded rote and boring on its own, but when the track was being mixed, it sounded perfect. It was just what the song needed to hold it together. Catfish didn't get to showboat on that one, but he didn't care, because the song got what it needed. So many bands have internal drama going on because the players get egos and think they deserve to show-off, all the while the song in question is hanging in the air, waiting for the poor silly humans to get over themselves.

I have stories and songs that hang in the air because I'm too stubborn and proud to change something I really like about them. And then they never go anywhere. The experts call this “writer's block.” Then they say to destroy the thing you love most about your creation, to “kill your darlings,” as you've heard hundreds of times. Then you drink yourself into a stupor and wonder how you came to be a masochist with no money. Then through this degrading process, your ego disappears and then there is nothing but the naked story, the simple root note, which is all you really wanted in the first place. All you had to do was sit back and listen.

Casey Stohrer  plays bass for the band Neo Tundra Cowboy and is currently working on a short story collection about Nashville.

What about you?  How do you serve your song?  Do you cross-pollinate your writing by creating in different genres?