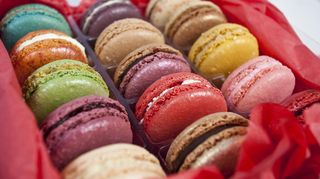 What is Macaron Day?  It was started by the venerable Parisian baker Pierre Herme (his name has an accent mark, but I can never figure out how to do those) in 2006, and the way it works is simple: you drop into a bakery, donate money to charity, et voila, you receive a macaron in return.  This year was the first year that my fair city of Portland, Oregon, has participated in Macaron Day, and let me tell you it was a raging success!

But first, perhaps you are wondering why I am writing about macarons on my writing blog? Simple. My next novel, the one that is currently being readied for submission with my agent, is about macarons.  Or more to the point, a macaron baker.

All Madeleine Miller wants is for her new Portland business, the Bonne Chance Bakery, to be a success. But things get off to a slow start when her husband Will runs off with an employee and starts his own rival bakery, leaving Mad in the lurch. Luckily she has the help of the bakery's accountant, Jack, and his precocious daughter Daisie. Portland foodies love the bakery's French macarons, but alas, their passion doesn't quite add up to financial success.

And then one day, world-famous entrepreneur slash actor Richard Bishop appears at the bakery and becomes smitten with Mad's macarons—and her. His offer to franchise the bakery concept feels like selling out, and Madeleine isn't interested. But then she learns of the shady financial dealings her ex-husband used to fund the bakery—and she's forced to accept his help. Soon she's catapulted into a world of luxury and excitement in Los Angeles as she supervises the opening of a second Bonne Chance in Hollywood.

But in her efforts to save the bakery, will she lose herself? Set in Portland, Los Angeles, and Paris, the novel illuminates the crazy path romance sometimes leads us on—and the circuitous route that will lead the way home. With its themes of identity, self-determination and following your dreams, The Bonne Chance Bakery is a feel-good novel with a serious message at its core.

(That description is taken straight from my query letter, by the way.  The very same query letter that got me a read of the full manuscript and a signed contract within one week.)

So, as you can see, attending Macaron Day was a must.  Luckily, my biz partner Debbie and I had scheduled a morning to do some planning on the workshop we held last weekend, and so we folded Macaron Day into it.  Our first stop was Nuvrei bakery, where rumor had it that they were giving out "starter kits."  And oh my God, what fabulous starter kits they were!  The most adorable tote bags imprinted with pink macarons.  I was so excited.  I needed one of those tote bags.  After all, I'd just finished a book about macarons!

We stood in line for probably ten minutes as person after person walked past us carrying the totes.  Yes–there were long lines for macarons!  The day for these luscious, pillowy pastel cookies has definitely come!  I got more and more excited as we neared the front of the line.  And then watched as the person in front of me got the last tote bag.

Oh well.  I recovered.  A bite of a salted caramel macaron revived me.  After we sat downstairs and did some planning, we drove across the river to Farina Bakery, which is very special to me.  Laura Farina let me shadow her last year, back when she was still baking macarons in a commercial kitchen, so I could see how macarons are baked.  Now she has her very own place, complete with apron murals.  And she is pretty much acknowledged to be the premier macaron baker in town.  (One headline announcing the opening of her bakery read, "Portland's macaron queen gets her own palace.")

There, at Laura's place, were more people standing in lines with their cute little macaron-imprinted tote bags.   Only one sob escaped my lips as I gazed at the tote bags.  Debbie and I nabbed a whole passel of macarons in a rainbow of colors for our workshop the next day.  And I got to chat with Laura, who is probably the most cheerful, positive person I've ever met.  (Must be the macarons.)

I was going to write about how I discovered macarons and how I got the idea for the novel in the first place, but I'm already pushing 800 words here so I think I'll save that for another post.

In the meantime, go get yourself a macaron (as they get more and more popular, they are more readily available.  Or, you can always mail order some here.)

I found the image of macarons on the Google.