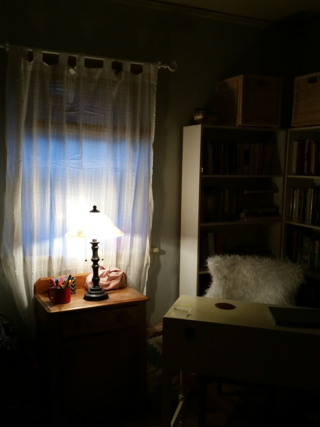 It is a wonderful rainy, blustery day here in Portland as I write this–my favorite, at least for once in awhile.  And here’s what’s going on:

What I’m Reading: Making Piece: A Memoir of Love, Loss and Pie and The Untethered Soul, both of which I’m pretty sure I was reading last week.  Things have been busy around here!  Next up is After You, which I can’t wait to dive into, and Rise of the Machines, a book on marketing.

What I’m Working On: Settling into my downstairs office (see photo) after a marathon work session on Sunday in which I unpacked a ton of boxes.  Alas, its been pointed out to me that there are still some unpacked boxes upstairs that never got moved.  But, honestly, I haven’t missed any of that stuff for a few months now, so I’m thinking most of it is going out the door.  I’m also writing my next novel, working with several clients and I have a new sort-of ghostwriting project.

What I’m Struggling With: Sugar.  There were sugar cookies in Halloween shapes for the adorable granddaughter to frost last week and that meant I had to eat a couple also.  And I’m baking pie tomorrow.  My chiropractor just reminded me that sugar aggravates inflammation and that it and this weather system that came in overnight were probably why my hips hurt so bad when I walked yesterday.  I’m going to be good starting Monday, I swear it!

What I’m Excited About: My blog redesign, a new feature here starting tomorrow and best of all A GIVEAWAY OF J.D. FROST’S NEW BOOK on Tuesday.  So come on back here to join in.

What I Want to Remind You About: If you live anywhere near Nashville, I’ll be there in January for the Room to Write retreat. Its a chance to have lots of time to write, meet other writers, plus get some good writerly info from moi and two others.  Read all about it here.

And of course, Happy Halloween to all!  What are you doing to celebrate?

Every  year as we head into spring, I clean and organize my office.  It is not something that is planned, I'm too right-brained for that.  It's just that it feels like its time.  Last year I bought a new desk set from Ikea and did a rigorous clearing out that took months.  While I've enjoyed the fruits of that organization, piles of papers and notebooks and journals and spirals still managed to spring up.  And finally they drove me so nuts that it was time to get down to it.  Which I've been doing over the last few days.

And what I found myself doing was creating containers. 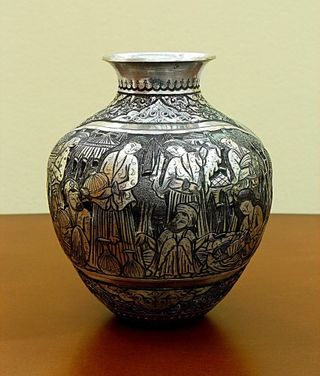 The act of clearing away the old creates a container for the new, just in the sheer act of doing it.  Getting rid of the gunk creates a vaccum of space, and you know the saying–nature abhors a vaccuum.  It's a cliche because its true.  Which is why if you need business or are longing for something new in your life, you gotta go make room for it.   Yesterday, I consigned items to the give-away pile that I never thought I could get rid of.  Things like a small mirror a friend gave me years ago, a tacky quirky piece of kitsch I bought at a craft fair, a pop-up book featuring images of buddhist icons.

I also found myself making file folders for new clients.  I've got several people who expressed interest in working with me, but haven't yet made definite plans.  Just the act of making files with their name on them made me happy.  I thought about them, wished them well no matter what they decide to do, and felt ripe with possibility for both them and me.  Because in creating containers for new clients, the universe will send them to me.  Could be the ones whose names grace the folder, could be others.  Its the act of making room for them, of showing the universe that I'm serious in my intent, that creates the end result.

Today, as I waded through a gazillion junk messages in my inbox, I realized I could create some containers there, too.  I am the worst when it comes to signing up for email lists, and my inbox reflects that.  It is full of mail from hard-hitting internet marketers whose freebie I wanted once upon a time, but whose ongoing message I'm not interested in.  And so instead of hitting the delete button repeatedly, I took the time to unsubscribe.  There was a wee moment of panic, I will admit, when the thought occurred that perhaps I would not have any emails left.  But then I reminded myself that cleared out the junk leaves room for the jewels.  My inboxes are now containers for new energy–from clients, from editors, from agents, from friends.

And here's the deal.  As I wrote in my journal about finishing up this organizational project the thought hit me: what will I do now?  As in, what will I do, now that cleaning my office isn't hanging over my head?  What will I do now, that I don't need to keep telling myself, I'll do that when I've organized my office?  The answer is clear, of course.  I'll commit myself fully and completely to my writing projects.

For a moment, I felt the fear in that.

And then I felt the glorious rush of liberation that creating a container for success brings.

What kind of containers for success are you creating?

Photo by Hamed Saber, from Everystockphoto.

This is my office.  Or at least, this is what it looked like yesterday, for awhile, after I had carted piles of books and binders and files and other must-haves out into the hall (see photo below).

I am, for the moment, office-less.

For years, I have been working on a grotty old desk using hand-me-down bookshelves and tables to fill in the gaps. The table beside my desk was too tall and actually had a hole in its top.  I covered it with a board, but still.  My office furniture left quite a bit to be desired.

And so finally, last weekend, I took the trip to Ikea to buy new furniture, a whole suite of it.  Woo-hoo!  We hauled 23 boxes home in two cars, with the desk top tied to the hood of my CRV.  And last night was the night designated to start putting stuff together.

But, as you can see, we didn't get very far.

That photo to the right shows the assembled base of the free-standing bookshelf.  What you can't see is that we did actually get two shelves of it put together.  (And, um, when I say "we" I mean that in the royal way because I sat in a chair and exhorted people to work harder.  I'm not so good with putting things together because I get frustrated and quit following directions, or fail to read them in the first place.)

So, my office now has one half-finished shelf unit and a few random screws and tools in it.  Besides that, there's a long way to go–a desk, a cabinet that hangs on the wall, and a rolling cart–all of which need to be assembled.  And that is why I am sitting at my kitchen table as I write this post.  The living room is full of the remaining Ikea boxes.  And the family room, my other refuge besides my office, is full of the cast-off furniture.  (Anybody need a grotty old desk?  It's yours for the asking.  But act fast, because Saturday morning it goes out on the curb with a "free" sign.)

I'm feeling very rootless and riled up by this, far more than I thought I would.  After all, I'm the one who happily sails off to Nashville and LA, declaring that all I need is my laptop.  But apparently I need my laptop and the security of knowing where all my stuff is at home.  (Because check out the photo to the left–that's half of my office, piled in the hall. There's another pile across the way.)

And now I understand why I resisted making this change for so long.  Because it is complicated and hard.  I'm not complaining, because I'm thrilled about the new furniture and what it says about where I am–ready to step it up.  I just hadn't anticipated how much upheaval there would be.

So, somebody make me feel better–have any of you gone through something similar?  Tell me there is light at the end of the tunnel.  (And by the way, I promise I will post photos when the new furniture gets assembled and everything is put away.)