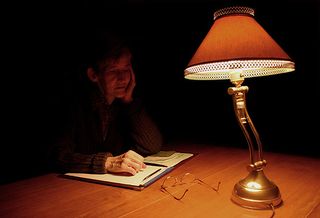 Hemingway knew it and used it.

I've expounded on it numerous times, including recently. (That juxtaposition of sentences makes it appear that I might be comparing myself to Hemingway, to which I say: bwahahahaha).

It is the single most helpful tip for you to get words on the page, and here it is:

KNOW WHERE THE FECK* YOU ARE GOING BEFORE YOU SIT DOWN TO WRITE.

Me, yesterday morning.  I got up at the usual time to work on the novel.  I've been doing some re-organization on it and I planned to finish that up before moving on. After my plot session with Cathy Yardley, I have some changes to make.  However,  I am not going to go back and fuss over the first few chapters.  I am making good notes and writing a few additional scenes, but I'm not going back to change things.  Because that way, madness lies.  And not finishing drafts.

The night before, I had dutifully made some notes of what I wanted to accomplish–where, ahem, I was going–on a little yellow index card.  And that morning I sat down, ready to refer to my notes and get going.

But I couldn't find the little yellow index card.

I couldn't, for the life of me, remember what I had promised myself I would do.  So I farted around on the internet.  Looked at knitting sites. Read blogs. Checked email, again.

And then finally reminded myself that my brain was stronger than that and I could indeed remember what I had set out to do. So I did it, sort of.  But I'd easily wasted valuable writing time.

And of course, later that day I found the little yellow index card.  And at least the experience reminded me of how important it is to my process to KNOW WHERE I'M GOING.  And it gave me a blog post.

Here's a little something I found for you, since we were talking about Hemingway.  It's his Nobel Prize acceptance speech.  But before you watch it, how about you let on what your best writing tip is?

*Feck is my new favorite British-ism, or at least I'm assuming its British because I picked it up in that silly British novel I just read.

**Don't ask, its something my sister and I say to each other, based on, I think, the name of a long-ago book.