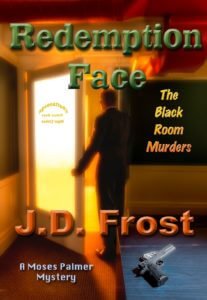 You guys, just yesterday I found out that one of my favorite humans ever, J.D. Frost, is releasing a new book today. It is called, Redemption Face: The Black Room Murders, and it is going up as a kindle release for only $2.99! I loved the first two books in the series.  They novels are police procedurals but with a depth to them. The main character, Moses Palmer, is what makes them different and so interesting to me.  He’s troubled and flawed, but still always strives to do the right thing–according to his own moral code.

J.D., the brain behind Moses, is a good friend and loyal reader of this blog.  Though he lives in Alabama, I’ve had the pleasure of meeting him in person a couple of times–when he came to France year before last, and once when I was in Nashville. And I’m excited about the latest entry in the Moses Palmer series. Here’s the blurb about the book:

Detective Moses Palmer is accustomed to driving strange routes, away from the river, around the river. Now Chattanooga is suffering a terrible drought and the mighty Tennessee that cuts through the city’s center is down several feet and barely moving. But Moses hardly notices. He and his new partner are chasing an eerie murderer who leaves his victims in darkness―total darkness. They have no suspects, so Palmer’s new boss, Maddie Kraikos, is breathing down his neck, in more ways than one. Then, the crazed killer ups the stakes, as if he knows Moses’ history, all of his history.

Does life sometimes scar us beyond recovery, beyond redemption? Find out in this thrilling new novel from J.D. Frost.

Go check it out, you won’t be disappointed!