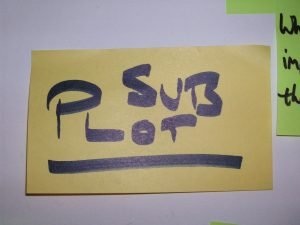 The other night, my husband and I watched an episode of Scorpion, which I’d only see bits and pieces of before and ended up thoroughly enjoying.  The show is about a band of misfit computer experts led by Katherine McPhee, who is their interface and explainer of the real world.  In this episode, a helicopter carrying a doctor had crashed into a parking garage in high winds.  The helicopter was stable, as were its passengers, but the doctor had to be extracted immediately because she was the only doctor who could perform a certain kind of surgery and she had a dying patient awaiting her. (Hence why she was being flown in.) So the gang had to figure out how to perform a very risk rescue.

It was all very exciting, but what struck me was how the writers made great use of sub-plots. One involved the meteorological expert’s budding ardor for a chemist who works nearby and also the trials of a couple who were dealing with infertility. (I know, I know, sounds like a lot to pack into one episode, but it worked.) The sub-plots gave what otherwise could have been a routine action show a good dose of human pathos, especially because of the way the writers worked them in around the ongoing drama.

And that made me ponder sub-plots. When I first started writing fiction back when we all lived in caves, I was intimidated by sub-plots.  They sounded complicated and complex to try to fit in.  I mean, it is hard enough to figure out one plot from start to finish, right? And then you’re supposed to add in others? And make them relate to the main plot?

But then I realized that I was over-thinking the whole sub-plot thing.  They can be as simple as a few brief mentions of a minor character’s arc or some silly joke that carries through the plot.

You can think of them as, simply, another thing.  A thing that will take the pressure off your main character and your main story, thus giving it, your readers, and you, some time to breathe.  Often a story feels a little bare until you add in this other thing.

Ways to add in more things

Add another aspect to your main character.

Think, for example, of your own life.  You wear many hats, right? You’re a writer, but you’re also perhaps a parent or an aunt or an uncle, a friend, and likely you work at some kind of job. Then there are your hobbies and activities–maybe you run every day after work, or spend the evening in front of the TV knitting. Or perhaps you bake amazing sweets.  Or raise turtles. Or like to flip houses.

But if you were writing yourself as a character and focused solely on one of those things, the story would soon get a little stale. What if we only saw your character watching TV? Or running? Or tending the turtles?  That would not be a developed picture of you at all.  And that’s one way to add a sub-plot: add another element to the character.  I remember one from a novel that I read long ago in which the main character was constipated the entire novel. At one point, he finally was able to go. I know, I know. But it could be thought of as another thing.

Boo-yah.  Done and done.  If you’re writing a mystery or thriller or literary fiction, a love interest adds a human element readers love.

Create a habit for your character.

Use a minor character for a sub-plot.

In my novel, Emma Jean’s Bad Behavior, I gave her assistant an arc that became a sub-plot. She started out completely against romance and ended up madly in love.

Give your character something to master.

Maybe your character takes up jewelry-making to find a way to relax from the stress of her job.   Or decides to plant a garden.  Showing a character mastering something new is satisfying for the reader.

Give your character a hobby.

I love to knit. While most of the time I do this at home, I also attend knit nights at local knitting stores and the monthly meeting of my knitting guild.  Something like this gives your character more dimension and also gives you more fodder for the plot.

How to use sub-plots

How do you use sub-plots in your stories? Do any of these ideas resonate? Leave a comment–or come over to the Facebook page to share.