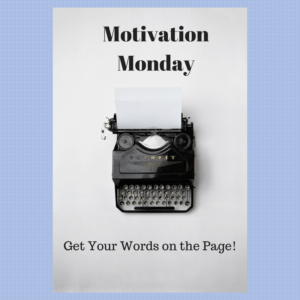 Yesterday I wrote about resistance.

But today I’m writing about its opposite, letting go. Which is funny, right? Like life is funny.

Anyway, here’s the deal. This past weekend, the hub and I took an overnight trip to Eugene, a hundred-ish miles down the road from Portland, and home of one of my alma maters, the University of Oregon (Go Ducks!).  We were going to attend a birthday party for my friend and client, Kim Leval. (And what a fun party it was–but that’s a story for another day.)

When we take a short road trip, I usually ask my hub to drive so that I can knit. (I wear these so I don’t get carsick.)  This past weekend, I had the perfect idiot knitting project (one you can do without paying much attention to). It is an airy scarf that I hope will be wide and long enough to wear as a shawl.   I’m not that far along on it, but I made good progress in the car.

Something bad happened to my knitting.  It started slanting.  As far as I was concerned, the thing was supposed to come out all nice and neat, eventually forming one gargantuan rectangle I could artfully wrap around my shoulders. But instead it was freaking slanting.  I kept telling myself it just appeared to be slanting, and that if I yanked on it enough, it would stop. So every knitting session turned out to be a marathon of yanking on the edges of the damn thing, then holding it up to see if that made any difference. 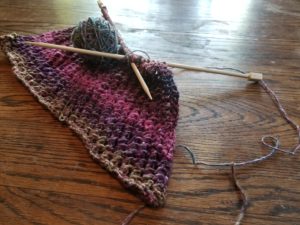 I wasmaking myself crazy trying to make the shawl into something it was never going to be.  And I might just as well have been getting my teeth cleaned for all the enjoyment I was getting out of it.

Finally, driving home yesterday I had an epiphany: the shawl is slanting because it is creating a bias drape as I knit. I have no idea how or why this is happening. (I’ve been knitting since I was a kid, and still the craft offers mysteries to me.) But it is happening and no amount of yanking is going to change it. So I decided to quit fussing over it and relax and enjoy it.

I no longer care, either. It will be what it will be. Maybe it really is forming a bias drape, maybe it isn’t. Maybe it will magically become the giant rectangle I have in mind! But most likely it won’t. Doesn’t matter.  Because, suddenly, the knitting is fun again.  I am no longer resisting the natural shape of the shawl and instead I’m relaxing and enjoying it.

I don’t know about you, but this is all too familiar to me in other areas of my life. Like all the times I’ve tried to force a character (or a real person) do something they have no interest in doing.  Or when I hang on to the idea of how a scene should go when it is clear that is leading itself in a different direction.  Or when I keep trying to do the same thing over and over again in my career when it is clear it isn’t working.

And when I finally let go (which is surprisingly hard) the relief is so sweet.

Is there something in your writing or life you’re hanging onto that you need to release?

Update: I almost forgot! (Well, technically, I did forget.) My How To Get an Agent Class is tomorrow! Come join us! Just in time for summer pitching!