Even though I got my undergrad at the University of Oregon and I'm a proud alumni, we don't have season tickets to football.  Luckily, I know people who do, and since this week's game fell on a Thursday and most people aren't self-employed like me, many of those people who have tickets couldn't make the game.  So, thanks to my son-in-law, I got to go. 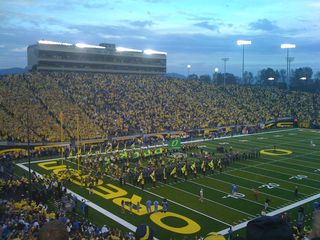 Just in case you haven't heard, the Ducks are doing rather well this season.  Last night when the announcer introduced the team, he said, "These are the words I've been waiting to say for 43 years: ladies and gentlemen, the #1 team in the nation, the University of Oregon Ducks!"

I haven't been waiting quite that long, but almost. 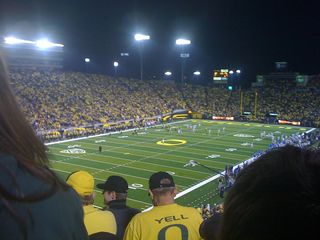 We've had a lot of false starts on the way to becoming a top-ranked team, and some heartbreaks along the way.  Like a couple years ago, when we were doing great until Dennis Dixon got injured and there went the season.  Or last year, when we made it all the way to the Rose Bowl, only to lose to Ohio State (whose #1 position we took over last week when they finally lost a game).

But the point is, the team just kept on going.  Paid no attention to the naysayers and focused on the game, meanwhile getting better and better as they went.

And that, my friends, is inspiring.

What inspired you this week?