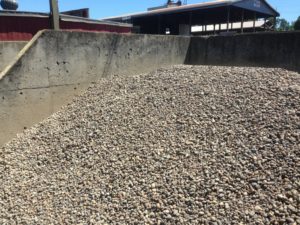 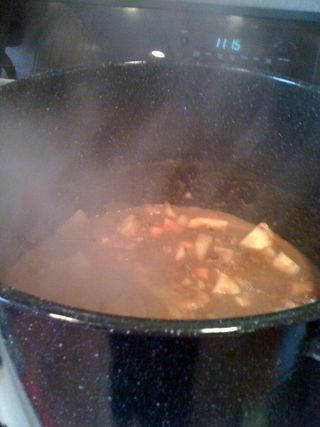 play in the Rose Bowl, and I thought, Maybe I'll become a cook." You know, it's a new year, why not go for a whole new career?  I could totally do it, especially if I turned out more delicious soup like this, for which I used the ham hock left over from Christmas dinner, a conglomeration of beans, and all kinds of vegies, including my current favorite, parsnips.

But then I remembered how many days I throw together a wretched, last-minute meal because I'm so engrossed in writing that I don't want to stop and cooking is just a bother.  I recalled how often I resented having to stop writing and run to the grocery store for food.  And I decided that perhaps a new career in cooking was not the best idea.

Usually these kinds of thoughts come to me when I'm discouraged about my writing, which I'm not at the moment. I'm actually quite excited about all the things I have on the horizon.  It is just that sometimes writing seems so hard, and it takes such sustained effort to make anything of it.  And because of this, sometimes I think it would just be easier to be a cook.  Or a retail clerk.  No, never mind, I've done that and it is way harder–being nice to the public is wearing at best.  But knitting is fun, and lots of people sell their stuff on Etsy….or I could start a business creating gift baskets, or….oh never mind, you get the idea.

But the truth is after I knit for a few minutes or so, ideas for my novel generally start percolating.  And every time I think about the types of things I might arrange in a gift basket, I end up wanting to write about them.  Because nothing has every captured and held my attention like writing.  The craft is endlessly interesting, because there is always something to learn, another level of skill to master, a new layer of depth to uncover.

(Brief aside: I have to tell my favorite story about learning to write here.  I'm pretty sure I've told it before on this blog, but too bad, it is good enough to tell again.  A few years ago, when I was in the middle of earning my MFA, I had dinner with the family of a friend of my daughter.  The mother, a former high-ranking executive of a Fortune 500 company, asked me how long the MFA program lasted.  When I said it was two years, she replied, "Oh, I thought you would be able to learn everything there was to know about writing in six months."  To my credit, I didn't kill her, and it was one of the few times in my life when I had the perfect reply on the tip of my tongue.  I said, "Most people think that it takes a lifetime to master the craft of writing."  Thanks, you can stop applauding now–can you even believe how ignorant that comment was?)

I like to think of myself as a person with many interests.  When I was younger, I was torn between two possible career paths–something to do with design (I designed and sewed and sold children's clothing when my kids were little) or writing.  But gradually, writing took over.  And while I maintained my interest in design (I wrote about art as a free-lancer in my early career), I slowly quit sewing.

There was a brief flirtation with gardening, which I came by somewhat naturally, seeing as how I grew up with a father who composted before anybody knew what it was and everyone thought we were nuts for separating the garbage.  But these days I'm lucky to throw a few annuals in the garden bed.  While others labor to grow vegetables, I am hard at work on my computer.  Once, a few years ago, I was walking through a Portland neighborhood with my fellow writer and wonderful friend Sue.  Portland is a huge gardening town and every block has at least a couple gardens bursting with flowers.  Sue asked me if I was into gardening and I replied that I had been, once upon a time, before writing completely took over my life.  She allowed as how she had had the exact same experience–that slowly, bit by bit, everything sloughed away, leaving only the obsession with words.

So it always come down to writing.  And I am reminded of this on this New Year's Day, as the Christmas 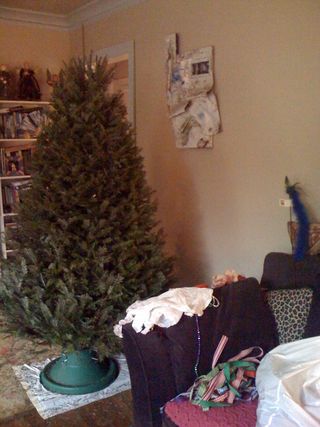 tree is being stripped of its ornaments and lights, and the angels and snowmen are being put away, because the first day of the new year is a good day for introspection.  So I'm pleased that my fleeting thoughts of starting a new career as a cook were quickly supplanted by the memory of how much writing means to me and how, no matter how hard I try, I can never get away from it.

And I think of what happened yesterday, when a new friend on Twitter challenged me to write for an hour.  I thought and thought about it and realized that I really had no excuse not to write for an hour.  Sure, I could work on my office, or sweep the kitchen floor, or do a load of laundry, but none of those things were as important as writing.

And so I wrote.  I worked on my new novel, which I can actually admit is going to happen because finally it feels like it is going to turn into something.  I wrote for an hour, and then I wrote for a few minutes more.  It was glorious, absolutely wonderful.  And so today, I am pleased to remember that there's really only one thing that is important in this world and it is this:

It always comes down to writing.

If we all just remember that this year, we'll be fine.