See you on the other side of this wonderful holiday!

Since I have you attention–big news!  You can download a whole book of prompts for free, free, free! I wrote the book for NoiseTrade, which is a really cool site.  I'll write more about it after Christmas, but for now, go check it out.  And don't forget that there are tons more prompts on my Tumblr blog, from whence the following came:

#143 I lost (and found) these things this year: a necklace and a silver fork.  Put those words together with tape and bus and write a sentence.  Now use that sentence as a prompt.

#144 A man and a woman sit together at a holiday party.  Others are up dancing and chatting.  Suddenly the woman stands and throws her wine (red, of course) at the man.

What happened?  What did he say to her?  Are they husband and wife? Or coworkers? What did everyone else at the party do?

#145 I just read a novel in which the earth starts turning slower and slower and days and nights stretch to loooong lengths.  What would you (or your main character) do if you had an extra hour every day?

#146 Both gigs were pretty good, but overall he liked being an elf better than a Santa.

#147 Stuffed.  She had eaten way too many Christmas cookies at the party.  But she couldn’t drink alcohol any more, because, well, you know, and so inhaling cookies was the only way to deal with what happened.  Which was terrible.  It always was when…..

#148 Last night, after I drank two glasses of wine and ate a meat and cheese plate, I ….

#149 The rain began softly at first, and then it came down harder and harder. Snow melted off the mountain and flowed into the river behind her house. The river became a raging torrent, creeping closer and closer to her beloved home.  Soon, it was time to evacuate.  She started packing boxes, but suddenly water started seeping beneath the doors.  She only had time to take one thing and flee.

What did she take?

And now, just for fun, because it's Christmas, here's a bonus prompt in the form of a photo: 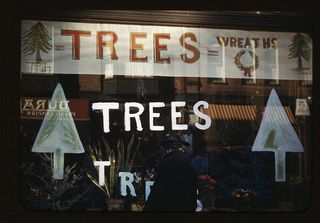 Write about what the scene evokes in your mind.  And enjoy!

Oh, P.S., I know this is a busy week but several people have asked me when I was going to write my "three words for the new year" post.  Look for it on Tuesday.