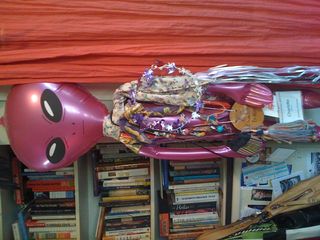 Before we begin this brilliant post about my (ahem, sideways) alien (does anybody know why my Iphone turns photos sideways when it sends them to my computer?), I would like to point out that I'm once again offering free coaching sessions.   You heard me.

All you have to do is head to this link, where you can click on a time that works for you and we will chat.  About your writing, your life, whatever is not working for you.  Can't wait to talk to you!

And now, to the real meat of this story, my sideways alien.  Who is actually right-side up in my office where he hangs, watching over me as I write.  I bought my alien at a Rose Festival parade umpteen years ago now.  And he has been my muse ever since.

What brought him to mind was a Saturday night stint working as a Rose Festival Star Light Parade marshal.  Those of you who subscribe to my newsletter already heard me talking about this.  (If you don't subscribe, just fill in your name and address in the form on the right.  Plus you get a cool Ebook.)  Briefly, being a marshal involves crowd control and radio-ing into the mothership on issues of parade pacing.

One of the crowd control issues, besides herding drunks, was to move along a vendor who had parked her cart laden with blow-up dolls of various sorts amongst the crowd, thus blocking many people's views and pushing them out into the street onto the parade routes.  In my efforts to get her to go on her merry way, I had the opportunity to inspect her wares.

Her cart was bedecked with some flags and banners of no import and the afore-mentioned blow-up dolls.  Sponge Bob and a variety of lame animals seemed to be the order of the night.  No cool weapons and no aliens.  Not that I was looking to replace him or anything, because if I did I'm not sure I'd be able to write.  My alien has been with me so long, and he's worked so hard to inspire me. Plus, he is purple.  Need I say more?

My alien is also the inspiration for a writing exercise that I might have shared before, but if so, it doesn't matter, because a few clients have lately told me how helpful it was to them.  And so it is worth mentioning again.

Practice writing description as if you were describing to an alien.

But, what's a file folder?  A folded over piece of paper used to organize papers.  But, what's paper?  Something we write on.  What's writing? What is red?  A color?  Great, thanks, but what is a color?

I know, you can drive yourself nuts doing this.  I may have just driven you nuts in that last paragraph.  And most likely it is not description that you'll actually end up using.  But what will happen is that it will get you thinking about the world you're describing (or creating).  It will allow you to get not only more understanding of that world, but more creative about bringing it to life on the page.

And that is a worthy goal for all of us.