What I’m Reading:  The Couple Next Door,  by Shari Lapena, a book I picked up on a whim from the “Lucky Day” shelf at the library. I started reading is Saturday evening after teaching all day, read after two small boys I babysat that night went to sleep, read with breakfast Sunday morning, and finished after church that afternoon. It is a page turner!

I’ve also been working a bit with Story Genius: How To Use Brain Science To Go Beyond Outlining and Write a Riveting Novel. The author, Lisa Cron, had me at brain science. I love that stuff. But in truth, there’s not a whole lot if in there. I have mixed feelings about this book.  I love the first part of it, in which she has you dig deep into your protagonist’s inner journey.  But I get a little nervous when people tell me exactly how to structure scenes and plot.  I always welcome guidance on this, but I don’t want to follow any one system slavishly. There’s a lot of great stuff in this book, though, and it is well worth reading, if you complete her exercises or not.

What I’m Watching: Same stupid sitcoms from last week. However, I’m happy to report that many of you also watch them. I feel vindicated. And, in the Department of Confessing How Pedestrian My Tastes Are, next week my favorite show starts up again. That’s right, its time for The Voice.  One of the reasons I love this show is that it demonstrates what it takes to make it.

What I’m Loving: The Writer’s Almanac, which is a daily newsletter you can sign up to have delivered to your inbox. For the love of all that is good and holy, why haven’t I known about this before? It features a poem, and a quote about writing, and then a couple longish almanacky-type  articles about something of interest–a person born on that particular day, etc. Bonus: you can listen to Garrison Keillor read the whole thing. One newsletter this week featured the poem Recuerdo, by Edna St. Vincent Millay. Again: why don’t I know about this kick-ass poet and the amazing life she led? (Okay, don’t answer that, it’s because I tend to ignore poets and poetry. To my detriment.)

Another Thing I’m Loving: This line, from the poem Sweater, by Jane Hirshfield:

a future in ink, who writes hand unshaking, warmed by thick wool.

Yes, the Writer’s Almanac has done the impossible–gotten me reading poetry again. (And yeah, I go from the sublime (poetry) to the ridiculous (The Voice) not just here, but everywhere in my life.)

What I’m Happy About: Wonderful new clients on my roster who are doing good work. I love working with them! (If you are interested, book a connection call!)

What’s going on with you this week? 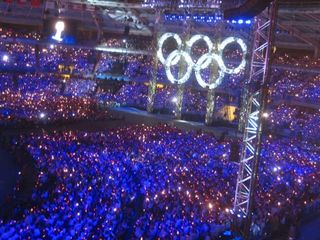 I'm home from Nashville.  I actually got home Monday night, but I went right from being picked up at the airport to see my Mom, and came home exhausted.  Its a long drag across the country.  I know, I know, people fly much longer distances all the time now, but I don't care, it is still a long flight to me.  Despite being exhausted, I awoke at 5 AM, which seems to be my new default time at the moment.  Its actually fun to be up so early, and boy oh boy, does it give me a lot of time to write.

Yesterday it was great to be awake at 5 AM, because it was a GREAT DAY.  I set up two TV trays in the family room, which is lacking in tables, and placed my laptop on one, and my journal and pen and the remotes (for some odd reason it takes two to operate our TV) on the other.  And then I sat in front of the television all morning–that is, when I wasn't running to the bathroom to grab kleenex because I was crying so much.

Obama and Michelle pulled up at the White House, Michelle with gift in hand, I started crying.  The limousine taking them to the ceremony pulled onto the crowd-lined streets, I was crying.  Hilary was introduced, I cried again.  And so on throughout the day.   It was really an amazing day.

A note about that present Michelle gave Laura Bush: rumor (or NBC) has it that the gift was a journal and pen for Mrs. Bush to begin her memoirs.  Here's what really interests me: it is said that ole Laura did not keep a journal for the entire eight years Georgie was in office.

She did not keep a journal.

Can you even imagine such a thing? Of course you can't because you are a writer and writers process everything through writing.  But so do people who are living through extraordinary times or events, and Laura qualifies there.  I can't understand how she would not have felt even a slight impulse to write something, anything, down.

While we're discussing the inauguration from a writerly point of view, how about that poet?  People on Twitter were making snide comments but honestly? I think the average American (myself included, alas) is just not that familiar with what is good poetry and what is not.   That being said, I liked her.  Her name is Elizabeth Alexander and I thought her poem hit just the right note–balancing the every day concerns that make up the lives of the citizens she addressed with the momentous aspect of the occasion.  Some of the lines I liked:

We encounter each other in words

What if the mightiest word is love?

Love that casts a widening pool of light

Praise-Song for the Day will be published in book form by Graywolf Press and sell for $8.  Oh, and they are printing 100,000 copies of it.  Not too shabby for a poet.

Finally, I leave you with the words of one of the NBC commentators (alas, I didn't catch which one, I don't watch TV often enough to recognize the voices):

"Nothing, now, nothing, is impossible."