I have a bad habit of creating characters that are, um, unlikeable.  Or, in the parlance of the publishing industry–unrelatable.

(As a brief aside, I do worry about what this says about me.  People seem to like me when they meet me in person, and I do try hard to be nice and positive.  But you never know.  I could be horrible and people just aren't telling me.)

This happened with Emma Jean, as I have written about a lot here.  People start out wanting to shake some sense into her (as a fellow blogger said) and end up loving her.   And it happened recently again–I was toiling away on another novel and when I took it into my writing group, everyone told me how much they didn't like the main character.  Which was actually a huge relief, because I didn't like her either.  She really had no redeeming features.  (At least Emma Jean was funny.)

So I set that novel aside, and now I'm working on another one.  The heroine of this novel is a character who has been with me a long time.  I wrote a mystery novel with her as the protagonist years ago (I recently found this novel and its actually not half bad, I just didn't have the fortitude to market it back then), and I've written short stories about her as well.

I think she's likeable.   And relatable.  But I want to make sure.  And somewhere in the dim recesses of my mind, I remembered reading a screenwriting book that had a section on making characters likeable.  So I went to my bookshelf and found Writing Screenplays That Sell by Michael Hauge, which sure enough, has a whole wonderful section on creating characters, one part of it called Establishing Character Identification.   I found his tips very helpful, and I paraphrase them here:

1.  Create sympathy for the character.  "This is by far the most effective and widely used method of creating reader identification with the hero," Hauge says.  One way to do this is to make your protaganist the victim of some undeserved misfortune.  For instance, in the novel I'm writing, my heroine gets laid off.  It could be a family member's death, a child being bullied, racism or sexism–you get the idea.

2.  Put the character in jeopardy. Thrillers and adventure tales do this well.  I see it used a lot in women's fiction when say, the protagonist's husband runs off with all the money, or she faces some other "soft" threat (as opposed to a situation in which she faces bodily harm or death).

–Make the character a good or nice person

–Make the character good at what he or she does.

Hauge emphasizes that writers must use one of these methods to be sure you establish character identification.  And, he says, you have to do this right away!  No meandering warm-ups–let us know who your character is and why we should care about him immediately.  Here are the rest of his ways to establish identification:

4.  Introduce your protagonist as soon as possible.  Sometimes I read manuscripts that confuse me because I can't tell who I'm supposed to be rooting for.  Often writers put auxiliary characters in first.  Uh-uh.  Get your hero onstage first.

5.  Show the character in touch with his own power.  Love this one.   It can be power over other people, power to do what needs to be done, or power to express one's feelings despite what others think.  We are fascinated with power–because so many of us don't have it.

6.  Put the character in a familiar setting.  Time, place, home, and family all create a sense of familiarity.  Maybe you've never lived in or visited New York City, for instance, but you have a basic familiarity with it because you've seen it on TV and movies a gazillion times.

7. Give the character familiar flaws.  Addiction is a perennial favorite because we all know someone who has struggled with it–or perhaps you yourself have (it is a writer thing, after all).  Or, Hauge says it can be less serious, like social awkwardness or clumsiness (correct me if I'm wrong, but wasn't that a trait of Bella in the Twilight series?).

8.  Make your character a superhero.  But only if you're writing fantasy or adventure.  There's something primal about these larger-than-life figures that resonate with readers.

9.  The eyes of the reader.  Hauge says that reader identification is strengthened when we find out information at the same time as the hero.  This works great in mysteries, for example.  (And does it drive you as crazy as it drives me when we see the detective figuring out the key to the whole crime but aren't privy to it?)

News flash: a 20th anniversary edition of the afore mentioned book, Writing Screenplays That Sell, was recently published.  Hit Michael's website for more info. (I have the old version, so don't yell at me if the new one you buy isn't exactly the same.)

Also: yes I know that most of you who read this blog don't write screenplays.  But for my money, the screenplay guys (and gals) are the absolute best when it comes to structure and story.  So read them and apply it to novel or memoir writing.

Have you used any of these methods to create character identification?  What are your favorite ways to make your character relatable?

Well, its not that far, really.  I'm heading up to the Washington coast to visit my Nashville friend Sue at her father's place.  What makes it feel far, far away is that there is no internet service and no cell phone service.   No blogging!  No Twitter!  No text messaging!

However, I'm only going to be gone until tomorrow.   I'm taking my camera and since my new end-of-the-year resolution is to snap lots of photos, I'm hoping to come back with many of them to share.  In the meantime, here's a photo I took last night of the Christmas train at Oaks Park: 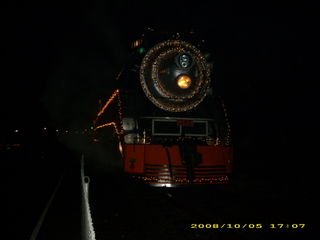 Not quite sure how to get that date stamp off it.  Words are my forte, not photos.

Which brings me to the point of this post.

I'm feeling a bit tired of it all and in need of some inspiration, which is where you come in.  I want to know what you want to read about in terms of writing, and what you need to know.  If you feel so inclined, pop me an email at wordstrumpet@gmail.com with answers to the following questions and in return I'll send you a free beta bcopy of my Ebook, Set the Words Free.  (But bear in mind that I'm going to be out of wireless range for a few days and thus will not be getting back to you with it until the end of the week.)

2. What is your biggest writing problem?

3.  Do you struggle more with finding time and motivation to write or issues with craft?

4.  Are you a published writer?

5.  If not, do you aspire to be a published writer?

6.  If yes, what do you aspire to publish (ie, novel, short story, get a screenplay optioned, poetry, etc.)

8.  What kinds of posts are most helpful?

11.  If you are a regular reader of this blog, what brings you back to it?

If you only want to answer a couple of questions, that's cool, I'll take any and all feedback.  Thank you so much and I'll be back with photos at the end of the week.