About a month ago, I got the idea that I should learn to appreciate the game of soccer.  We're more of a 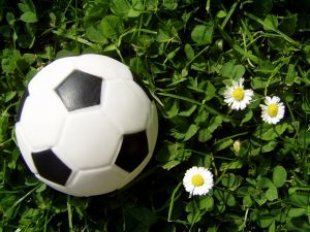 rugby/football type family, so I'm not as familiar with soccer.  Lately, though, the Portland Timbers have been hawking season tickets and the thought appealed to me.  Wouldn't it be fun to go hang out at the stadium on summer evenings, drinking beer, and eating hot dogs and popcorn?  And, oh yeah, watching soccer?

When I mentioned this to my family, they chortled, pointing out that my attention span for soccer is about as long as it is for doing yard work.  Or painting.  Or listening to jazz on the car radio.  (Not that I have anything against jazz.  On the contrary, I love it.  I just don't want to listen to it in the car, because it is not driving music.)

After I got over being offended, I decided that I would learn to love soccer.  Conveniently, this was shortly before the World Cup began.

And so I procrastinated from working on my novel watched several of the games, grieving when Ghana lost, and cheering Spain on.  And, like Bucky the cat, I must admit that my campaign to enjoy soccer met with some reservations.

Chief among them is that soccer is, um, boring.

Or is it just me?  There are so many loooooong stretches when nothing much happens except for the ball being rolled back and forth.  Fas-ke-nating, as my father used to say.  Or not.

But as I settled in to watch the endless thrilling championship game yesterday, I realized that soccer and writing do share a similarity.

Because here's the deal: all that time you spent thinking and thinking and not getting anywhere, you really were working hard.  Your brain was composting–deep down inside turning the gems of your wisdom over and creating new connections with them, until finally, up pops the brilliant idea you've been awaiting.

And apparently this happens in soccer, too, though I can't quite figure out how.