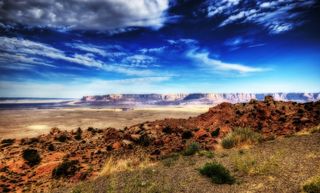 The Santa Anas are blowing and fires are erupting all over southern California where I am currently ensconced at the top of a canyon overlooking the Pacific.  It is not quite as idyllic as it sounds, though I admit it is stunningly beautiful here, because I am here to care for a friend.

Perhaps it is the change of locale, but yesterday I awoke with a writing exercise resounding in my head.  Weird, huh?  Then again maybe it is due to the physical exercise I am getting.  This morning I ran down the canyon, so very proud of myself because I was not out of breath at all.  Then it was time to turn around.  And I realized I was at the bottom of a very steep hill.   Suffice it to say that I did not run back up said steep hill.   But I did make it.  And despite the sore legs, of which I am reminded numerous times a day in this house of stairs, I feel great.

And so here is the writing exercise that my subconscious created, The Bluebird Canyon Special.  This one is probably good for generating material for a new story, or if  you get stuck in your current story and need to jazz it up with a new character.  I've not had a lot of time to play with it, so give it a whirl and let me know how it works out.

The key is to do this fast and don't over-think it.  You are simply generating material here, okay?

Voila!  Now you have a character in action.  You can use this sentence as a prompt for generating a scene or a vignette or whatever you need.  Write the sentence at the top of a piece of paper, set a timer and write for 20 minutes without stopping.

The other thing you can do with blond Tara is put her in the middle of a cluster.  This is hard to describe on a computer, but it is the same thing as Mind-mapping and it is also called webbing or spidering.   Write blond Tara's name in the middle of a piece of paper, and circle it.  Then write another bit of description and draw a line from the circle in the middle to this new bit of description.  Another detail of her appearance goes on the same line.  Then you get an idea about her family–that's a new line.  And perhaps up pops a thought about the conflict she faces–another line.  Pretty soon you will start to have quite a few ideas about ole Tara floating about in your mind.

But ole blond Tara needs a conflict, right?  Here's the fastest way to find her one: either in your clustering or your freewriting, answer the following question:  what does she desperately want or what is she desperately afraid of?  In the case of wanting something,  put obstacles to her getting it in front of her.  In the case of fearing something, make her face it.

Follow these steps and before you know it, you should have Tara waltzing about your novel or story.  Let me know how it works out for you.