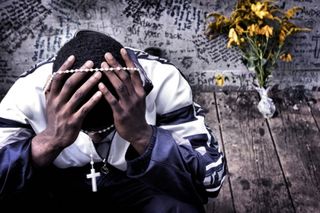 We've all been there.  (Some of us are there much more than others.)  The miserable writing session when the idea won't come, when no words appear on the page, when nothing works, no matter how hard you try.

And just as a gloriously wonderful writing session can make the world glow with a special light, a bad one (or a series of bad ones), can make the world a dark and depressing place.  And that's no way to live.  It really isn't, because it's not going to help your writing.  At all.

Now, I'm not advocating that we all adopt a Pollyanna attitude, no matter what problems we face.  I get that many of us are enduring difficulties that make it hard to be cheerful.  What I am proposing is that life is better when you look at it with a glass-half-full approach, and your writing will be, too.  Because wallowing in weepiness for an extended period of time ultimately doesn't work.

And so I have gathered some hints to help you drag yourself out of the muck.  Again, these are all based on personal experience.  I've been there.  I still go there.  But I'm much better able to change my mood these days.  It takes work, but it's worth it.  So here you go.

1.  Feel it. So often when we feel something negative, we immediately gloss over it and attempt to cover it up.  But when you do that, the emotion tends to pop up somewhere else, at an even worse time.  Surprisingly, the fastest way out is often through.  Feel the emotion fully.  Magnify it, even.  Immerse yourself in it.  This won't feel good–but that's the point. The more
fully you can feel the pain, the faster you can get through it.

3.  Renew your vision.  You know that dream you have of becoming a best-selling novelist?  Now's the time to envision it again.  You probably lost sight of it while you were busy beating yourself up about what a crappy writer you are.  Connect with it again, in all the 3-D, technicolor glory you can muster.

4.  Send love.  Close your eyes and imagine gold and silver light in your heart center.  Now send it out–to anyone who made you feel bad about your writing, anybody who rejected you, even to the writing itself.  Love is the most powerful force in the universe.  Use it for the good of your creativity.  And use it creatively.

5.  Go write.  Right now, or as soon as you can. Writing will make you feel better than anything.

What's your favorite technique for making yourself feel better?  Leave a comment, so we all can benefit.