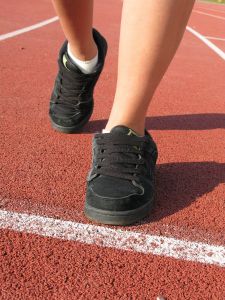 I've just taken up running.  Well, my version of running, while I get used to it, which is more like run-walking: run a block, walk a block.  Actually I'm up to running two blocks, then walking two blocks.  What started all of this was an offhand comment from a friend.  (Oddly enough, much of my life seems to stem from offhand comments.  I got the beloved pug when one of my son's friends said, "You should get a pug."  Guess that is not an offhand comment so much as a direct command.)

At this point, you may well be asking, what does running have to do with writing? I'm glad you asked, because it turns out to be quite a bit.

Let me tell you first what I like about running.  Besides the obvious thing,that it is going to help me get fitter and trimmer, there's the challenge of it.  I've been walking for years, but running is harder and it requires more concentration, because it is demanding more of me.  This is perhaps why running feels like a spiritual practice at times, too.

As I was run-walking this morning, pushing myself to run farther than I technically wanted to, several thoughts occurred as to what I could learn from running.   What I am learning centers around the actual doing of it, for lack of a better phrase.  Here goes:

Do what you don't think you can do.  Last week I didn't think I could run anywhere, at all, ever.  But I can.  It takes me pushing myself every second, but I can do it.   And the fact that I'm running makes everything else in the world seem possible (kinda like Obama winning the presidency.)  Do you think you can't write a novel?  Think again.  You can.  Think you can't write that article for your website?  C'mon, of course you can.

Do what scares you.  It scares me to run down a busy street sometimes.  Its very visible and I imagine everyone looking at me and sneering.  When, of course, most people are so intent on getting their morning coffee or getting to work that they don't even notice me.  What about you?  Are you afraid to write that memoir?  Afraid to delve into the dark places inside that you know need to see the light of day?  Take a stab at it, once you get into it, the work might not seem so scary.

Do what you don't want to do.  At the end of a run-walk, I just want to saunter home.  I don't want to push myself and run two more blocks.  But I make myself.  So, too, with writing.  Maybe you don't want to stay up late to finish your word count for Nanowrimo or to revise that chapter.  Nobody does.  Do it anyway.

Do what you want to do.  Yes, this is opposite advice from above.  When it comes to writing, consider doing whatever you want.  The best writing has a voice and tone to it that is mostly indescribable.  It is different from anyone else's voice.  And that comes from writing what you want, how you want it.

Do whatever it takes.  Such as lacing up your shoes and heading outside even if it is raining.   Inclement weather is not an excuse. Or setting the alarm for 5, so that you can get up and write before you go to work.  If that's the only time you have, use it.  Do whatever it takes, because….

It gets easier. The more you write, the easier it becomes.  The more you run, the more your body gets used to it and quits complaining quite so much.  The point is to get yourself outside or to the computer.  Showing up consistently makes it easier.

And finally, since we are talking about pushing ourselves and doing things we thought we couldn't do, here's a story for you, the one about the pilot suddenly blinded by a stroke.  Who was flying a plane solo.  Who landed the plane safely.  Read it here.

0 thoughts on “Writing and Running”