This week it's Patrick's turn.  Please welcome a guest post by my new friend and fellow creative, Patrick Ross, a Washington, D.C.-based freelance writer who blogs at The Artist's Road and is on Twitter at @on_creativity.  He is working on a narrative nonfiction book chronicling his cross-country road trip. 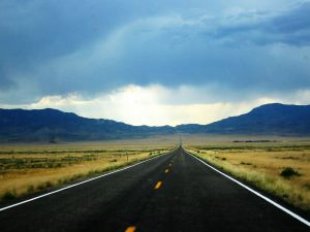 When it comes to ignoring the obvious, I'm a master. What is obvious to me now, and what I ignored for many years, is that I have an internal drive to create, and to express that creation through words. My awakening to this truth did not come easily, but it did come, after the metaphysical equivalent of massive and repeated blunt-force trauma to the head.

Let me step back a moment. For about a quarter-century I have been a professional writer. I'm proud of the writing I've produced, and pleased I've always managed to find folks willing to pay me for my prose. But very few of the words I've written over the years have found their way into what we would call "creative" works, whether fiction or nonfiction.

I was creative in pursuing stories as a journalist, but just-the-facts-ma'am in my prose. The think-tank papers and government filings I've authored have resulted from my creative brain being applied to research and problem-solving, but they certainly don't read like a Carl Hiaasen thriller. (Perhaps we'd all be more interested in public policy if government documents did read like a novel?)

Last summer I drove across the United States, a six-week trip through thirty-five states.  I interviewed more than forty creatives — writers, painters, songwriters, photographers, filmmakers, actors — and captured their stories on film. They opened their homes to me, and their hearts.

I began the trip as a journalist. I was there to tell their stories. But to my surprise, my interview subjects received me as a creative peer. They saw my journey as one of creative self-discovery. I told you I can be dense, but after countless hours of driving empty roads, reflecting on my conversations with those creatives, I came to realize they were right.

As it turns out, opening my mind to the obvious was the easy part. The hard part now is building a new life based on maximizing my creative being. I'm shifting my professional focus, remaining a professional writer but doing so full-time under my own shingle. I'm expanding my network of fellow creatives through Twitter and a blog. It's how I came to find the author of this delightful blog, my new friend Charlotte.

Now I'm working to make sure that I remain open to possibility, rather than closed to reality. It's a bit unnerving, expressing my creativity and thus exposing myself. But I take the plunge with joy in my heart.

So go read Patrick's blog, y'all.  He's got awesome videos with fascinating creative people on it.  By the way, the photo is by centralasm, from, you guessed it, Everystockphoto.