Note: I grew up in the printing plant my father owned, and he had a whole stack of pads titled While You Were Out, with check boxes and lines to fill in about things that happened in his absence. I am going to be out for a few days at a wedding, so I thought I'd fun some oldies but goodies.  Here's the first, from back in 2010:

Since I seem to have been writing a lot lately about fear, and how to keep it at bay while you write, I thought it might be time for a little practical exercise.  This is one I present in my Writing Abundance workshop.  I did it for the first time years ago and have found the results of it–a way to deal with my critic–incredibly useful. 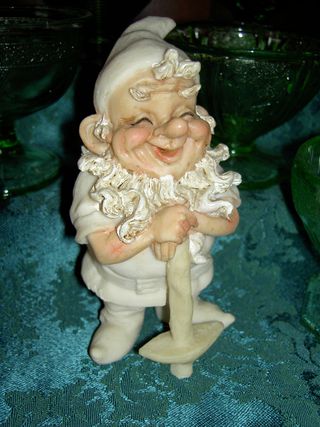 One of the problems that I often hear about is people being sidelined by perfectionism.  They get paralyzed because they are afraid they won’t do something right.  What this problem really is about is listening to your own inner critic, who constantly tells you that you are not good enough.  It is one thing to tell your critic to shut up, but it doesn’t really work.  Instead—meet your critic head on and disarm him.  Here’s how, by giving him and image and a name.  I met mine years ago.  His name is Patrick and he looks like a Will Ferrell in Elf, only small and not nearly so goofy and friendly.  Instead, Patrick is a bit of a prig.   Let’s go ahead and have you meet your critics and then I’ll tell you a trick to deal with her or him.

1. Close your eyes and take a few deep breaths
2. Think about how you feel when you are being critical of your writing.
3.  See if any images come up—color, energy, sound, smell?
4. Hold with whatever you are getting and let it come into form.  It might be an animal, a human-type creature, or something totally abstract
5. Now open your eyes and write.  More details will emerge as you do.   Write a description of what you saw and then see if you can give it a name.  Even a purple circle with the name Stan works.

Here’s the deal: after you have identified your critic, you can talk to him.  I made a pact with Patrick years ago: he lies quiet while I write rough drafts, write in my journal, and do free writing.  In return, as soon as I begin editing and rewriting, Patrick is up and at ‘em, ready to help me out.  Because that is where Patrick excels—at being critical.  Sometimes I forget about Patrick and he gets cranky, very cranky.  But then he jumps up and down to get my attention, generally when I am first starting on a project.  Then I remind him of our deal.  And then he's content to go hang out wherever it is he hangs out until I call him forth.

So give it a try.  And report back if you feel so inclined.  I'd love to hear what shape your own critic takes.

0 thoughts on “While I Was Out: Say Hello to Your Critic”