(In case you don't know–what, you've lived under a rock for the last umpteen years? Kidding, just kidding–my title is a take-off of a song from The Sound of Music, the best musical of ALL TIME, and no I'm not talking about the stupid rip-off live version with Carrie Underwood in it.) 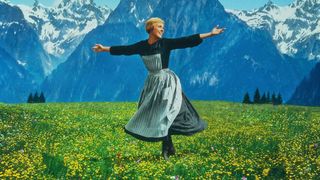 This is the last time you will hear from me this year.  And I thought it might be fun to look back at what inspired me, perhaps inspiring you to think about what inspired you this past year and what might inspire you in 2015.  I've been doing a lot of work with goals (there is nothing I love more than planning and pondering) for the new year, and an important part of that is looking back to see what happened in the last year.

I've had a few disappointments, goals that didn't get accomplished and progress not made in certain areas.  But I really prefer to dwell on the positive, and besides I have it on good authority (I read it in two, count them, two different places on the interwebs and we all know how reliable that source is)that 2014 has been a year of discovering what it is you truly want while 2015 will be all about accomplishing it.

Here we go with my inspirations (in no particular order except for the way they came out of my brain):

1.  Indie publishing.  As the year began, everyone, all over the webs, was talking about making it as an indie writer.  All you had to do was throw shit up on Amazon and it sold and made you a millionaire!  I was intrigued.  Then, in March I went to AWP in Seattle and heard Hugh Howey, the poster child for indie publishing speak.  More enthusiasm! Much excitement! He made $150K in one month with his books!

I was intrigued enough to experiment with putting a wee bit of effort out, and posting a story for sale.  While I didn't get rich selling it, I do like to think that it has introduced some new readers to me.  Maybe.  Not sure.

Now, as we head towards 2015, I hear much less noise about how easy it is to make tons o' bucks on Amazon and I think they may be due to their Kindle Unlimited option.  I don't know the exact details but it is something to do with customers getting all the Ebook downloads they want for free with a Prime membership.  Yeah, that might put a crimp in author's royalties.  Ya think?

However, I still applaud the indie publishing movement.  It's going to continue to be fascinating to watch the battle between Ebook and print, and indie versus traditional publishers as the future rolls along.  And I am planning to publish my MFA novel myself, because it is sitting on my computer, so why not?

2. France.  'nough said.  No, wait.  Not really.  Because, France.  And Paris.  And writing with a group of like-minded people.  It really is the best.  Getting away from your regular routine and devoting yourself to writing in an exotic location rocks.  That's all there is to it.  (You can still join us–3 spots left.)

3. Family.  Always and forever.  I am blessed, no doubt about it.

4. Splashy Success.  Not mine, not yet, but as the year ends I've got people like Cheryl Strayed on my mind. She is, of course, the author of the memoir Wild, which burst splashily upon the world when Oprah reinstituted her book club in order to feature it.  And then Reese Witherspoon made a movie of it, which premiered recently.  I saw the movie a couple of days ago and I liked it.  The film is about courage–the courage to confront the demons of your past and put one foot in front of the other over and over again while you do so.

By all accounts, Strayed, who is a Portland resident, is a woman who went from so-broke-she-couldn't-buy-Christmas presents to millionaire status seemingly overnight and has maintained a lovely even keel throughout.

5. Writing Fast.  The class I took about it was a bust, but never mind.  More and more I'm seeing that writing fast without thinking too much is the way to go.  Because, rewriting.  Once you get the words on the page, then they are there for you.  As Henry, my 3-year-old grandson would say, of course.  But we so easily forget that of course and allow our writing to stall as we stare out the window at the 27-degree morning because we don't know what words to put on the page.  These days, when I catch myself stopping to think, I force my fingers to fly across the keys.  There's nothing more satisfying to a writer than toting up a massive word count for the day!

I'm in the midst of rewriting my novel at the moment, (on page 209 of 305 and I'm aiming to complete this rewrite by the end of January) so I'm not actively writing a rough draft, though every so often I do write 1K words or so on a new idea I have.  (New ideas are one of my tragic flaws. Bright shiny object!  Let's abandon this WIP and start a new one! I really have to be careful with this tendency.)  But, in September, when I took the above-mentioned class that really was more like a support group, I batted out 24, 280 words in the first two weeks of September.  Then I got on a plane to France and that was the end of that.  However, the novel is waiting for me on my computer and when I complete the current rewriting project I shall return to it.  The story needs a lot of work, and I've had ideas that will take it in a new direction, but again, all those words are sitting there waiting for me.  Woot woot!

6.  Breathing.  I'm going to brag here for a minute, so avert your eyes if that bothers you.  But, many, many years ago now I bore two children.  And I brought each of them into the world without one bit of anesthetic.  Completely natural births (though I did have to have Pitocin the second time through, because he got stuck and it turned into an emergency, but that's another story).  And how did I accomplish this?  Through breathing, of course.

So I find it ironic that all these years later I have realized how often I constrict my breathing.  I just did it as I wrote that sentence!  I hold my breath at the throat as I write and I'm not sure why I've developed this habit.  Anyway, I've been working on becoming aware of it and changing and also just taking deep breaths throughout the day whenever I think about it.  The results are quite wonderful, though I confess to backsliding a bit during the holidays.  It is something I will continue to work on in 2015.  (I wrote about it earlier in the fall, too.)

That's it.  I know there's a lot more that inspired me, but those are the things on my mind as the clock ticks toward a glorious new year.  I wish you all the very best for next year and I thank you for reading my blog.  Why not take a minute and share–what inspired you in 2014?

A couple of quick notes:

–Don't forget to download my book of free writing prompts!  There's one for every day in January. Fun, fun, fun.  (And it will help you with writing fast.) Go here.  It is free, free, free.

–And for anybody who lives in Portland, I'm having a signing next week!  My Twitter friend (and guest poster here) Tam Holland and I will be signing books, drinking coffee, and chatting with "fans" as the wonderful coffeeshop owner calls them on Wednesday, January 7, at 4 PM.  The location is the Rain or Shine coffee shop on SE 60th and Division.  Come meet us!

0 thoughts on “So Long, Farewell, Auf Weidersehen Goodnight to 2014”