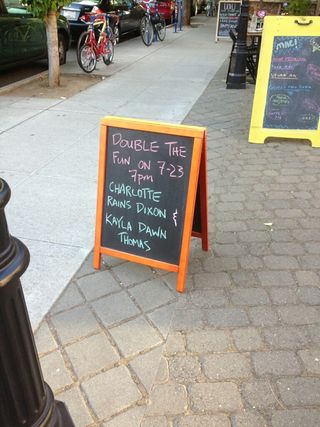 What I'm grateful for: Friends and family who turned out en masse last night to hear me read from The Bonne Chance Bakery manuscript, and to also hear Kayla Dawn Thomas read from her latest novel, Tackling Summer.  She and I are Twitter friends and since she lives in Washington and I live in Oregon we'd never met until last night.  So fun. She's awesome!  The bookstore where we read, Another Read Through, is awesome, too, and owner Elisa offers readings every Thursday night.  She's a huge supporter of local writers and a really cool person, too.

What I'm reading: The last two weeks I've been struggling through Leaving Time by Jodi Picoult. She's a NYT bestselling author, but frankly, I was not overly impressed with her writing.  It was certainly serviceable enough, but the characters never grabbed or charmed me. I looked up the reviews on Amazon, and while many were over-the-top glowing, several agreed with me.  I also learned that she is known for her twists at the end, so I skimmed and skipped to find out what this one was.  And can I just say that if I'd bothered to read the whole thing I would have been furious? Like, throw-the-book-across-the-room, rip-it-into-shreds-even-though-it-was-a-library-book furious.  The twist was as hackneyed and stupid as the old it was all a dream schtick.

Now I'm reading, sort of, Life As We Knew It, by Susan Beth Pfeffer.  I say sort of, because it's sort of depressing.  Not giving anything away here to tell you the premise, which is that the moon gets whacked out of orbit by an asteroid and terrible things happen on earth.  It's all written from a teenager's perspective.  It is compelling, but sometimes I just can't take apocalyptic fiction. Although, in looking for a link I've just discovered this book launched a whole series, so that's hopeful.  I also discovered that Pfeffer retired from writing books last year, which I just don't get. I want to write books until they shovel me into the ground, many years into the future.

I'm also reading After Perfect, a memoir by Christina McDowell, the story of a wealthy family losing everything.  Another cheery one.  But its good.

Where I've Been: Seattle, last weekend.  More to the point, the suburbs south of Seattle, near the Sea-Tac airport.  My cousin (and fifty million other cousins) lives up there in a house a few feet from Puget Sound.  Nice spot, to put it mildly.  We were celebrating the wedding of her youngest daughter, and even though I nearly got arrested (I'm exaggerating the tiniest bit) by an overly zealous traffic-type person who didn't want to let us cross a street where a parade was congregating, it was a lot of fun.  After all, few things are better in life than watching your three-year-old grandson entertain a roomful of people by dancing to Shut Up and Dance.

What I Need: A housecleaner.  Every time I gaze (in a writerly manner) in any direction in this house I see cobwebs. Sigh.  At least I'm making progress on sorting through files and books in my office, in advance of moving it back downstairs.  I WILL get this project done before I leave for Europe in September.

What I'm Reading Online: I read a lot of blogs and newsletters, but surprisingly, not a lot on writing.  Oh well, my tastes have always been eclectic.  For writing blogs, I recommend Writer Unboxed (I love Barbara O'Neal's posts there), Janice Hardy's Fiction University, and Shawn Coyne's work on Story Grid.  Oh, also Steven Pressfield.

And now, here's my compendium of non-writing blogs and newsletters I follow: thekitchensgarden, where New Zealand transplant Cecilia writes every day about her "farmy" and also dispenses all manner of practical wisdom; Dispatch From La and Kelly Rae Roberts for visual inspiration, emails from Steve Chandler and Brian Johnson for kick-ass motivation, and Leonie Dawson for a combination of visual, crazy, and down-to-earth inspiration.  I know there are more, but these are enough for now.

And that's enough from me for now! What's going on with you as we cruise toward the end of July? I think we should all take a cue from Henry and get some dancing in this weekend!