When my granddaughter Olivia was a toddler, just learning to talk, she used to suddenly stop what she was doing, say, “need something,” and stagger in a babyish sort of way to the kitchen.  When Livie said “need something” she always meant food, so it was easy to satisfy her.

Alas, it is often not so easy for writers.

I’m in Collioure, France, teaching the second of two week-long workshops.  We meet every morning for instruction and writing and most often the assignments we give are related to the writer’s work in progress. During the first week, my co-leader Debbie decided that one of the pieces “needed something.” 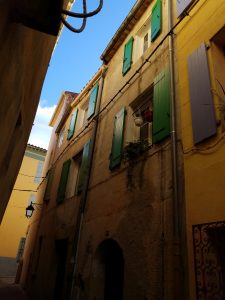 I immediately thought of Livie, of course, because it always amuses me to hear those words. But then I thought further–about how to figure out what it is that your work needs. Sometimes that can be quite opaque. You know it needs something, but what? And how do you identify that what? These are the kinds of thorny writer problems that can stop you for days–or weeks.

But “needing something,” doesn’t have to stop you in your tracks. Rather than let it do that, apply the cold light of writerly analysis to it, or at least as analytical as it gets around here (this being the province of a dedicated right-brain, ENFP, process-oriented writer).

Most often you’ll be asking yourself what is needed for a scene or character, but you can also apply some of these ideas to the big picture. You could try asking the following:

Does it need a different setting? So often, a simple location shift can suddenly open up a scene.  Amazingly, nine times out of ten I find this to be the case. Changing a scene to a different setting is sometimes just what it needs. Sounds so simple as to be un-useful, but trust me and try it.

Does your character need more depth?  I am the type of writer who figures out the basics, doing some prep work in character, setting, and getting a rough idea of the story, and then plunges in. I learn from the middle what the story needs. And this often results in characters needing more depth. When this happens, I go back to the well, and learn more about their backstories and motivations. I look at their arc–where they start and where they end up–and study how that will affect events that happen in the novel.

Does the dialogue need more differentiation?  It is easy, especially in first draft writing, for all characters to end up sounding the same.  And, let me stress, this is totally okay in first drafts, because you’re just trying to get the story on the page. But if you’re feeling like your story needs something while you’re immersed in a later draft, take a look at the dialogue. Try giving your characters speech tics, or phrases they say repeatedly. Also remember that some characters might talk a lot, some only a little. Some might speak in long sentences, others in short bursts. Play around with it.

Does your scene rise or fall? Or, in other words, is it flat? A scene with rising or falling action starts in one place and ends in another.  Your main character may start out the scene feeling on top of the world–and end it as discouraged as she’s ever been. Or vice versa, in multitudes of variations. Examine your scene and see if you can give it some life by un-flattening it. An excellent book that tells about this in depth (maybe even too much depth) is Story by Robert McKee.

Do you need a second thing? Sometimes, a story, whether long or short, just needs another element.  We writers are often afraid to put too much into our stories, scared we’ll lose the focus. But often the opposite is true–we don’t put in quite enough. Is there a sub-plot you can add in? Something that

So as you can see, when your work needs something, you can view it through the lens of the fundamental aspects of fiction and figure out what is missing. I hope. Let me know how it works out for you.

And if you want to come to France for a writing workshop in an idyllic location next year, you can! We’ll have information about the 2019 event shortly.  In the meantime, you can check out our website for more information. But if you want to get on the mailing list, just email me.