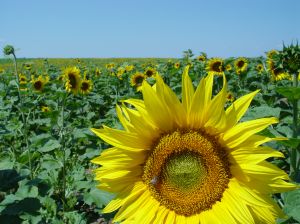 It's summertime, in case you hadn't noticed, and my brain is feeling lazy.  So, inspired by Tim Ferriss, who sent out a 5-Bullet Friday to subscribers (I'm one, though I have a little bit of a love-hate relationship with him), I thought I'd write a lazy blog post.  Besides, today is a holiday, or sort of one (for those of you not in the states, tomorrow is our Independence Day, more often known as the Fourth).  So here goes:

Book I'm Reading: Little Night by Luanne Rice.  Jury is still out on this one, a women's fiction novel to be sure.  I've read a ton of her books so I'm sure I'll end up liking this, too.  (By the way, she's got a nice piece on writing novels on her blog.)  And, since I'm feeling lazy, I'll add a couple more books I've read lately rather than write a whole post on this topic.  I finally got The Girl on the Train from the library, and read it in a couple of days.  The first couple hundred pages were fantastic, and then I got a bit weary of it all.  But read it as a primer on adding conflict–lots of it–to your novels.  Also read A is For Alibi by Sue Grafton (duh) for purposes of a structure discussion. This is the first book in the series that is currently at X, coming this summer, and it held up well.  I loved these books when I first discovered them and got to about F or G, before I got bored with the same set-up over and over.  But this series was groundbreaking in presenting a female private detective, and its fun to read a book set before the internet and cellphones changed the world.

What I'm Writing: My next novel.  It involves crystals and female correspondents of the journalist type and that is all I will say.  (The macaron novel is currently being shopped.)  Oh, and I'm managing to pen the occasional blog post.

What I'm Listening To: I don't listen to music when I write and I always feel a bit inferior when I read the elaborate play lists that other novelists compile for each book.  But I do love music, and in our kitchen the radio is always on (weird old-school habit I got from my mother) and it is always tuned to our local station, KINK-FM, which plays a fantastic variety of tunes.  Go to the website and stream it and you'll see what I mean.

What I'm Complaining About: The heat.  It was 97 degrees here yesterday, and that's after a couple of weeks of temps in the 90s, with more to come.  Bear in mind that I live in Portland, where the joke is that summer starts on July 5th, the day after Independence Day, which is always rainy. Not this year.  We've had a crazy warm and dry winter and spring and now a hot, hot summer.  Ugh.

What I'm Loving:  Getting up every morning by 5:30 and sitting outside on the deck writing.  It's my favorite time of day.

So, what's up with you this summer Friday?  Please share.  You can use one of my "whats" above or create your own. I'd truly love to hear what's going on with you! 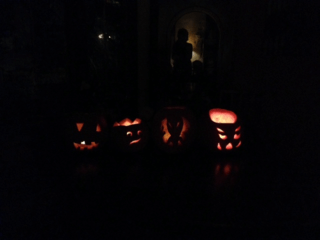 Punkins, ready for the big night

So, I've had this idea lately.

I shall tell you.  It's that maybe, once in awhile, more often than a blue moon, maybe even weekly, I'm not sure yet, it likely depends on you all react, I shall write a post that is more personal in nature.  In case you hadn't noticed, I just about always find a way to relate my posts to writing.

Mostly because it is my firm belief that when you are a writer, everything does relate back to writing. But, still.  There are other aspects of my life that might be fun to comment on once in awhile.

Thus beginneth the idea of the Wednesday List, with today's post being the first one.  Consider it a glimpse into my world beyond writing. Are you ready? Here we go.

1.  I'm cooking a lot.  Ha, news flash!  To some of you, this might not seem like much, but I am a Lazy Ass Cook Extraordinaire.  As in, buying something to throw on the grill and a prepared salad at Whole Foods.  Or even better, convincing my husband we need to go out.  (This generally does not take much work.)  But in France, I appreciated sun eggs (that's what they called them) so fresh they didn't need to be refrigerated, and tomatoes that tasted like they used to, back in the dark ages.  And so I vowed to cook more when I returned, and I have.  Mostly soups and quick breads so far, but still. And I have purchased two pieces of cooking equipment–a gigantic crock pot and a Madeleine pan. Haven't actually baked any Madeleines yet, but I will.  Maybe this weekend.  I shall report.

2. A story about how knitting saved my writing.  I am a knitter from way back, like birth, even. And yet I don't have much to show for myself, because I, um, tend not to finish things.  It's the idea of the finished object I like, apparently, and the process.  I am trying to change this, but in the meantime, I was recently reminded of how beneficial a knitting project can be.  Because I am trying diligently to finish my projects, I had my most recent one, a sweater made from lovely heathery blue/purple yarn sitting out within easy reach.  Thinking I was procrastinating, I sat down to knit.  I was procrastinating because I was stuck in the writing of my novel, trying to figure out how to fit in a couple of new scenes.  I shall think, I told myself, in order to justify the procrastination.  And guess what?  It worked! Within minutes, I had it all set in my mind.  So then, of course, I didn't get much done on the sweater.  Julia Cameron advocates repetitive activity as a creativity booster in the Artist's Way but I hadn't experienced its benefits in quite some time.

3.  My crazy Tub Wad cats.  They are two tabby brothers we rescued from the Humane Society 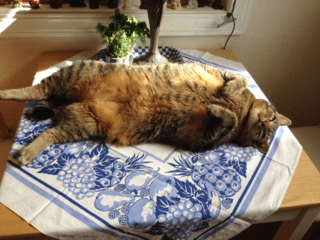 Lieutenant, the fattest Tub Wad, in his favorite position

several years ago and they are fat.  I mean fat. (See photo for proof.) I used to tell people they were just big-boned, and they are, but I have to admit that even factoring that in, they are fat. And they love to eat.  Their evening feeding time is 5 PM, and long about 2, they start complaining that they are hungry.  But the other day, they were both happily asleep on the couch at that hour and I couldn't figure out what was going on.  Then I remembered the strange noises coming from the room we grandiosely call the library (if you could see it now you would laugh because it is serving as a storage and junk room) where their food was stored in a gigantic plasticized bag.  (We have to buy special food from the vet for them.)  I had secured the top of the bag with a clip, but Captain and Lieutenant made quick work of that.  Turns out they were helping themselves to food at all hours of the day and night. I'm pretty sure it was Captain who figured it out.  He's the smart one.  I always say he's studying to be a human in his next incarnation because he's constantly observing, with his ears perked up so you know he's listening to every word.

4.  Halloween.  I love it.  And its this Friday.  Yay.  But I'm not even sure why I like it so much.  I don't eat the candy, preferring dark chocolate or something more dessert-ish.  And I loathe dressing up in costume.  I think it is the fall color that I like, and the feeling of the crisp air, and all that (though this year our color here in Portland is the worst I've seen in years).  I even like–wait for it–the time change, so that it gets dark early.  Blame it on my Danish heritage, but the dark days of late fall are my favorite time of year.  This year, as always, I'll make my famous chili with the secret ingredient that makes it the best chili you've ever eaten, and my family will come over and the grandbabies will go out trick or treating (maybe–they are still a bit young) and there will also be wine, and beer for the men.  And fat Tub Wad cats lying in the middle of everything.

5.  Overwhelm.  I've been in it since I returned from France.  And I realize I do not handle it well. When I'm overwhelmed, I procrastinate.  Since I'm having problems getting things done, why not make it worse by not doing anything?  Yeah, it works real well, let me tell you.  I'm starting to climb out of it, with only two manuscripts left to read this week (and don't get me wrong, I love reading my client's work) and some forward progress on the rewrite of my novel.  Part of the reason I get overwhelmed is that I have a busy social life, with obligations to family and friends.  Obligations, ha! It's pure pleasure and I know it.  But every once in awhile I have to call enough and quit saying yes to things. 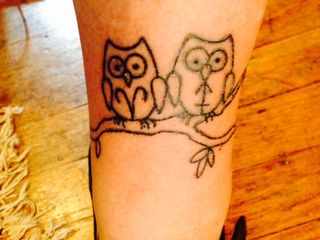 6.  I got a tattoo.  You can see by the accompanying photo that is it the best thing ever.  Owls are the family symbol because my Mom collected them for years, long before they enjoyed their current moment.  My daughter got a huge, complicated tattoo on her upper arm featuring an owl, and my sister is getting one in December (she had to get an old tattoo removed first). My tattoo is in honor of my grandchildren, with the symbols of their astrological signs in the body of each owl.  And guess what?  It didn't hurt much at all.  I was lying on the table squeezing my eyes shut, telling the tattoo artist to be sure and warn me when he was going to start, certain I was going to flinch and ruin it all. And then when he began I said, "Is that all there is to it?"  Now I'm ready to get another one.

Okay, so a whole novel later, that's what's going on in my life at the moment.  What's up with you, writing or otherwise?  Please leave a comment!