Yesterday I wrote about attending the Eagles concert in Portland last Saturday night and promised real takeaways from the experience for today.  So here we go: 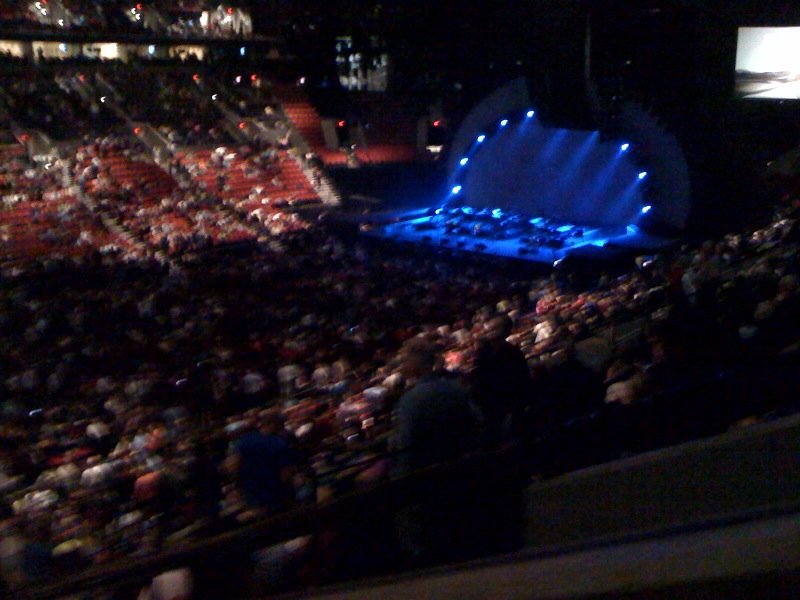 1.  Put it all out there.  Writers, put it all on the page.  Painters, put it all on the canvas.  Musicians, all in the song.  All you got, every time.  This reminds me of the second to last night of American Idol this season, when winner Lee DeWyze sang his heart out through two songs.  By the end of the second one, he appeared completely spent, like he put everything he had into his performances.  Awesome.

2.  Everything counts.  Or, staging matters.  Attention to detail is very important and this is a crucial point because many creative types (um, like me) are visionaries, and less wont to deal with the trivialities of details.  Bad mistake.  A typo on the first page of your manuscript might cause an agent to toss it into the round file.  A caveat: deal with the details as the very last step, okay?  Don't let them bog you down in the white heat of writing a first draft.

3.  We're so lucky.  Okay, I touched on this yesterday, but it bears repeating.  Being a creative person, particularly a writer, is the best existence on the planet.  I often wonder how my non-writing friends make it through life.  As a writer, I make sense of life by writing stories about it, which gives it meaning.  Without that, what do we have?  A series of seemingly unrelated episodes.

4. Keep it going. Whatever you do, don't lose the connection to your work.  Your writing or your creative work can and will change.  For a few months you may concentrate on blogging as your main outlet and then you get an idea for a novel and get so engrossed in it you forget to blog.  Doesn't matter.  What matters is putting words on the page, one after the other, in some form.

5.  Lower your expectations.  I have seen the Eagles twice before, and Don Henley twice also.  Recently have been listening to so many teleseminars that I've not been as into music as usual.  So I wasn't waiting with bated breath for this concert.  Then it got rescheduled and that made it lose some energy for it as well.  But, oh my God.  The concert reignited my passion for music, for the Eagles, for creativity.  And I don't think it would have been as powerful if I'd been eagerly anticipating it.  Because, as the Buddhists know, sometimes having expectations just ruins things.  So, too, with your writing.  Don't expect anything except to show up at the page.

6.  Be in it for the long haul.  At one point during the concert, Don Henley said he'd been doing this for 40 years and was finally kind of getting the hang of it.  Enough said.

7.  Allow the old to nurture the new.  The band played all their old standards–Take it Easy, Hotel California, Life in the Fast Lane, I Can't Tell You Why, Desperado (and there's nothing better than when everybody sings along to all the words of the old hits)–but they also played the newer and less familiar songs from their latest CD.

So that's it, my final word on music and creativity and writing.   At least for the weekend.  Have a good one, everyone.  And comment on music, creativity, the Eagles, writing, or even what you plan to do this weekend.

***By the way, the fact that it is Friday has not escaped me.  Besides looking forward to the weekend (wine on Friday night is a requirement of life) the significance of Friday is that it is Friday.  Friday, when I am supposed to alternate between running guest posts and mini-critiques.  But, alas, I cannot do that if you do not send me guest posts or material to critique.  So c'mon, save me from having to write five days a week and send me something!

Saturday night I went to see the Eagles.  Until then, I had forgotten how much rock concerts inspire me. 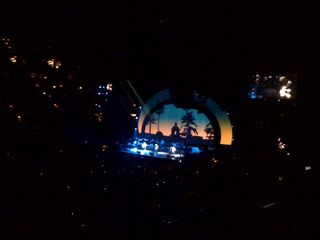 Experiencing a concert is such an all-encompassing event for me, I end up feeling determined to go forth and do my creative work with renewed vigor.

I mean, musicians have to be creative on so many levels.  Not only do they have to worry about writing the music, but then there are lyrics to think about.  And after that they have to strap on the guitar or pick up the drumsticks and stand in front of thousands of people and play their hearts out.

All I have to do is write.  And lord knows, often enough I complain about that.

Two things kept going through my head as I was at the concert:

1.  Oh my God, we're so lucky.  All of us who are creative in any way, shape, or form are just damn lucky. Because we have a hunger to share, and we share it–we shape the world through our creativity.  And there's no better fate than that.

2. Once you have found it, never let it go.  (This is a line from a song in a musical–The King and I?) I've been through periods where I've lost it for awhile.  To be honest, I'm coming out of one now.  Oh, I never lose it completely any more.  I can't, because I earn my living writing so I have to keep at it.  But sometimes I lose it where my personal writing is concerned.

The inspiration that grows into a project that keeps you up late or gets you up early in the morning.

The connection you feel when you're working on it, how you transcend who you are and become part of something bigger–the way you do when you're at a concert, or watching a sunset, or gazing into the eyes of someone you love, or writing.

It is all connected.  All we have to do is take it and put it on the page.

I have more thoughts on this, to be posted tomorrow in the form of actual, real live, useful takeaways.  In the meantime, feel free to share what inspires you.

Today's guest post comes from my Welsh friend Derek Ayre, hypnotherapist, musician, and writer extraordinaire.  Visit his music site here.   (My spell checker goes nuts over his British spelling, but I like it so I've left it in.)

Music is one of the great loves of my life and I have been playing pianos and digital keyboards since the age of about 5. But love piano playing as I may, I had this feeling that it was going to be one of the most difficult subjects to write about. This is probably because throughout my life, whenever anybody has asked me what my piano playing was like, I could simply sit down at the piano and literally show and not tell by playing the music. If a picture paints a thousand words, then so does a piano – when it is being played of course!

And so it came about that one day, I was looking for a suitable subject to blog about and I was considering a piece of advice I had so often heard in my writing classes. “Write what you know”, and I had this idea about writing all about music and piano keyboards, so I opened a new blog called The Clavinova Piano and Keyboard Blog.

Writing my first entry was easier said than done and the first thing I did was to look back through all my old music books I had used when I was a kid for some inspiration. It took quite a lot of brainstorming to come up with a post that was going to be interesting to non-musicians and those who were merely toying with the idea, about learning to play. Even my music teacher had a prop in the form of a Steinway grand piano! And after she had taught me how to name notes and recognise their value and pitch she merely said, “OK, now you play it”. And then when I made a mistake, she would either take my finger and place it on the correct note, or say no more than “start from the top again”. Words were rarely uttered during a music lesson and the written word came in the form of red writing on my music copies with terse statements such as, “watch your timing!” or “take care” and then there were crude sketches of a pair of eyes, to save her having to write “watch your timing” or “take care”. A person of few words, written or spoken, but words or no words, she was a good teacher, I must admit. But I digress…

After scratching my head for a day or two and searching around the Internet for inspiration, I came up with the idea of creating for my first blog post and titled it, Clavinova Piano, explaining what a clavinova piano was and what it would do. I suppose I was fortunate having one of these instruments, because had they not been invented, it would have been a pretty lame post that would be entitled, What is a Piano?   Everybody knows what a piano is.  And my idea was to introduce to my readers what could be done with a digital piano and why it was worth purchasing one and learning to play it. I could then see what interest the blog generated and decide whether or not to continue with the subject.

Once the blog went live, and I had got it recognised by Google as actually existent, I was surprised at the interest it generated and I even had some comments left in the first few days. Not bad, I thought, for a brand new blog that I never thought I would ever find anything to write about. However, I made a dreadful mistake on the control panel of the blog and deleted the post!  All the comments went with it, and I hadn’t even responded to them or taken note of who they were from. But it wasn’t quite back to square one, I had saved my work in my word processor, so it was just a matter of cutting and pasting it back into the blog.   Now, less than a month later, I am becoming more and more aware and inspired about things to write about in the world of music playing and will never again pay heed to my sceptical mind saying, “I don’t know what to write about!”