First there was the story I read online about how the Northwest, including Portland, could expect a 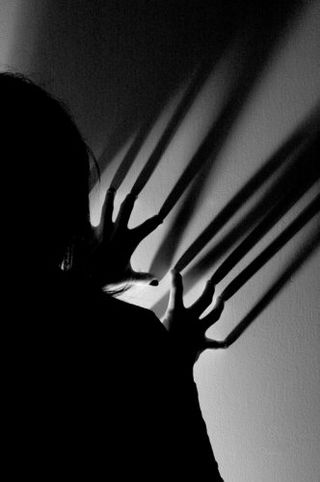 major earthquake of the sort that just decimated Chile sometime in the next 50 years.   I hate earthquakes.  I expect the earth beneath my feet to stay steady, thank you very much.

Then I watched a little bit of the local Fox News.  I never watch television news, but it was on after American Idol, and the TV didn't get turned off fast enough for me not to see the story about the guy who got slashed up by a trio of men who invaded his backyard in the early morning hours.  (The victim was outside having a smoke.)  This wouldn't have been so bad, except it happened fairly close to my house.

Before I knew it, I was getting re-acquainted with my old friend, fear.

Now this kind of fear is a little different than being scared of stuff.

No, this kind of fear is insidious.  It is the kind that terrorism is designed to instill.  It is the kind that seeps throughout every cell in our body, a nameless, creeping dread that if left unchecked, starts to subtlety control thoughts and actions.  And eventually it will manifest itself in my writing.

It won't be obvious how it's manifesting, either.  Instead, it'll take the form of procrastination or suddenly deciding not to move forward on a project or convincing myself its okay if I never write another novel. Because this kind of fear is leech-like, attaching itself to your bad habits and insecurities and magnifying them.  This kind of fear feeds on uncertainty and indecision. And before you know it, you're telling yourself you never wanted to be a writer, really, anyway.

So, how to battle such a sneaky enemy?  Here are some tips:

Acknowledge it.  The more you do this, the easier it will be to see.  Took me awhile, but last night after I'd soaked myself in a bath of fear, I realized what was going on.  Sometimes acknowledging is half the battle.

Dance with it.  Or wrestle it, or punch it in the face.  Argue with it, yell at it, tell it to go away.  Because this fear is stealthy and cunning, it doesn't like being overtly dealt with and chances are doing just that will keep it at bay.

Protect yourself from it.  Stay away from the things that cause it in the first place.  I usually don't watch television news, for instance.  I won't read books or see movies that have animals in them because I worry about the animals the entire time, even if there's a happy ending.  And because I take on things far too easily, I don't see war movies and I refuse to read anything written by Cormac McCarthy.

De-stress.  Meditate, do yoga or Qi Gong, find yourself a good relaxation CD (my current favorite, since I'm in the middle of a wonderful hypnotism program) or do whatever it is that rids you of stress.  Fear feeds on nerves, anxiety and stress, so it is important to deal with it regularly.

Write.  It always comes back to this for me.  Writing regularly is the best revenge against everything, including fear.  So write often, every day if you can, whether you are writing on a project you're passionate about or in your journal.

And let me know what your fear-busters are, would you?  We can all use some help in banishing fear.

Photo by Violator3, used under a Creative Commons 2.5 license.

0 thoughts on “They Call it Fear”