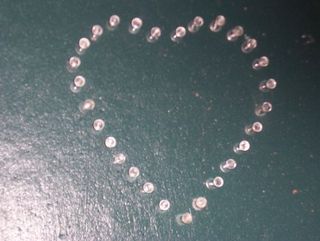 I'm in the midst of a marketing program given by Christine Kane, and she talks some in it about vision boards.  A blog post that she did on creating vision boards comes up first when you do a google search for the words, which is some strong google juju, let me tell you. So she knows vision boards.  And I envy admire her for this.

But then I realized that I know vision boards, only of a different sort.  Of the fiction sort.  And all this got me to thinking that I've never told you about my own version of vision boards, which will make me feel better about myself and not quite so envious.

So now I'm going to.

What I like to do is create a vision board for a novel (or other book) that I'm going to write. I learned this during the first residency of my MFA, as I sat discussing my future novel with my new mentor, Melissa Pritchard, she who I also admired slavishly the entire two years of the program.  She told me about the joys–and benefits–of creating a vision board for a novel. How creating a place to collect visual images and written words that had to do with the story could be incredibly inspiring.  This became my first assignment.  I was to create a vision board for the novel I wanted to write and write an essay about the process, an assignment I relished and could hardly wait to begin.

So I went to Office Depot and bought two of their inexpensive posterboard triptychs.  Since my novel was set in two locations, and location was so important to the novel as to practically become a character in it, I reasoned I needed two vision boards.  One was for the Portland portion and the other for the Santa Fe portion.  I put on these boards images of the two very different places that inspired me: fir trees and gray skies for the Portland portion, and dramatic vistas and vast skies for the New Mexico version.  I made lists of characters and timelines and tacked them up, as well as photos of people who might look like characters in the novel.  Any time I found an image in a magazine or a postcard or anything that inspired me, I added it to the vision board.  Any time I needed a written reminder of something over and over again, I made a note of it and added it to my vision board.

These two vision boards were my constant companions as I wrote the novel over the next couple of years.  I had them propped on my desk and I'd switch them out according to which part of the novel I was working on at the time.  When I finally set the novel aside, I folded up the vision boards and put them in my closet, where, as far as I know, they remain to this day.  That novel never did get published, though I learned an enormous amount writing it.  And every time I think about writing it, I think about those vision boards and how important they were to me and the writing.

Fast forward a couple years to the writing of Emma Jean's Bad Behavior.  The idea for that novel, and the main character's voice, came to me in such a rush that I never had time to make a vision board.  It was all I could do to get Emma Jean's insistent voice down on paper.  But now that EJ is making her way in the publishing world and I have an idea for another novel, I'm pondering the vision board idea again.  I'm such a visual person that I surrounding myself with imagery relating to the book truly inspires me.  So once I get back to Portland, I think a trip to Office Depot is in order.

How about you?  Do you have any experience with a novel-writing vision board?

***Yes, I know my blogging schedule is completely wonky.   And that I have not posted anything on Writing Abundance this week.  I'm hit what I calculate to be Phase Four of this lengthy sojourn away from home today, and it is the most intensive and stressful–the Writer's Loft orientation.  Things will get back to normal next week, when I'm on retreat in the Great Smoky Mountains and have more time to write.

4 thoughts on “A Novel-Writing Vision Board”