Please welcome my friend and fellow writer Beverly Army to the blog today, as she makes us drool with envy over her vacation in France–and gives practical tips on how to maintain a writerly attitude while away from home. 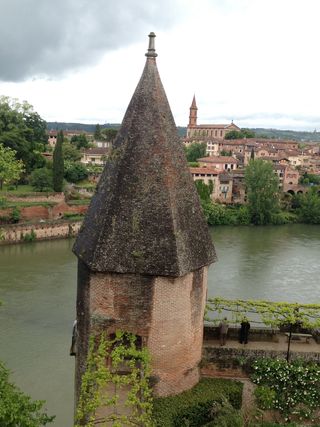 Ahhh, summertime. The season of slowing down, of
garden-fresh veggies, of tart lemonade, bike rides, and salty beaches. The
season of lofty writing goals. And traveling*.

I don’t know about you, but my guilt-o-meter bounces
about when it comes to writing and traveling. On the one hand, there’s all that
beautiful time yawning ahead of me, ripe for setting word after word after
word. On the other hand, the adventures to be had! The extra sleep to sleep!
The long, luxurious dinners to eat!

What is a creative person to do? How can a writer make
the most of vacation without losing the groove, enraging the muse, ignoring the
story gods?

I returned recently from three weeks in France.
Originally my plan was to work two hours a day on my novel. But then I didn’t
want to carry the keyboard for my iPad. And then the days were filled with
adventures and late, late dinners that left me too tired to work. Instead, I
gave myself permission to use the three weeks to fill my creative well.  Let me share what I learned:

Embrace Being an Outsider (this isn’t permission to be an
obnoxious! Manners matter! See the next paragraph!) I spent weeks before the
trip planning what I would pack, checking the weather, reading posts from
fashionable expats in Paris. I did not want to stick out as a tourist. I wanted
to blend, to see the country as though I belonged.

But, here’s the wonderful thing about traveling: we do
not, in fact, belong. When we travel, we are outsiders. We are foreign, whether
we travel to the next state or another continent. We may have mastered the
manners of a region (always, always say “bonjour” when walking into a shop in
France), still, we don’t quite fit in.

During this trip, I realized that the not-fitting-in was
like a pebble in my shoe. Awareness of my surroundings—the glow of the church
in Auvers after it rained, the smell of the Canal St-Martin in the early
morning, the taste of cheese (oh, the cheese!), the sound of a language I could
just barely understand—filled me with new ways of seeing and describing.

Try a New Medium My observations and experiences were one
way to do just that. For years I’ve messed around with paint, but the
I’m-a-writer-not-a-visual-artist self talk limited me. I packed a watercolor
journal and a small box of paints. While I didn’t journal every day, I did make
efforts to paint frequently and to add little ink and wash images to the
narrative pages. Journaling in a new medium helped me to see better and made me
think about my observations in a different way. Score another one for filling
the creative well!

Quiet Time Can be Lively Even the most adventurous,
active vacations have some quiet time built in. I spent many hours on planes
and trains during my trip. If I’d been home, I would have felt obliged to fill
that time: run errands, write a new scene, or clean the house. But five hours
in the quiet car of a train left me with little but my imagination. Sure, I
read, knit, and wrote in my journal, yet I also indulged in staring out the
window, imagining the inhabitants’ lives as we zoomed past farms and villages.
The conductor didn’t scold me for being too noisy, but he might have if he’d
been inside my imagination!

Love Every Language I can read French passably. I can be
polite in French, even if I can’t converse about more than the weather. I
embraced being an outsider, and at the same time, I wanted to communicate. That
is, after all, the goal of every writer. I pulled out my high school French,
and I made efforts. I bought and struggled through French fashion magazines. I thought
ahead about what I wanted to say and practiced it. I asked my French-speaking
pals to repeat words so I could understand the nuances of pronunciation. I
listened with great care to conversation before I admitted how little I
understood.

By loving the language of the place—which might mean a
different language or simply a dialect or regionalisms—a writer can learn about
her own language (ah, so that type of sentence construction is common in
English, but not in French) and develop an ear for authentic dialog (a French
speaker “takes” a decision; an English speaker “makes” a decision).  Everything we learn about language
emerges in our writing.

Travel and vacation are meant to recharge, and if that
means not writing every day, accept it, and find your own ways to fill the
creative well.

*humor me and let “traveling” and “vacation” mean the
same thing. Even a staycation can be an opportunity to travel outside of
regular routines!

What have you learned about writing from travel?

All photos by Beverly Army Williams.  Top to bottom:

–View of Albi from the Toulouse Lautrec museum

–A Nutella crepe, enjoyed during the French tradition of "taking a pause."