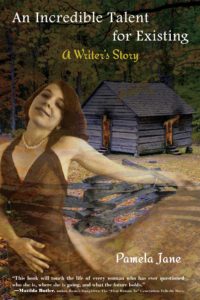 I’m excited to share this interview with author Pamela Jane with you.  I know Pamie through my friend and biz partner, Debbie, and I was lucky enough to read an advance copy of her book. I loved it. Truly could not put it down. So I was happy to learn a bit more about the story behind it.  Pamie is an accomplished children’s book author as well as a memoir writer. Scroll down for more information about Pamela Jane and read on.

Tell us a little about the book, please.

An Incredible Talent for Existing is a personal, psychological, and political adventure about how I, as a young woman, got caught up in the radicalism of the 1960s while trying desperately to find my way back to my true self, and the lyrical world of childhood.  This inner war of identities became more intense when I embraced radical feminism; my new husband and I were comrades in revolution but combatants in marriage; I was a woman warrior who spent her days sewing long silk dresses reminiscent of a Henry James novel. One half of me wasn’t speaking to the other half.  And then, just when it seemed that things could not possibly get more explosive, my country cabin exploded in flames, and I found myself left with only the clothes on my back.  The story goes on to describe how I  integrated my two selves and became the writer I inwardly imagined myself to be.

Rumor has it that the book took, ahem, a few years to write.  Can you talk about the process of writing it?

It took me over twenty years and hundreds of drafts to finish the book, but maybe I was just slow!  (I also published many children’s books during this time.) Besides identifying my story, I struggled to find a voice that felt natural.  That seems like it should be easy, like an actor who does not appear to be acting, but it is deceptively difficult to appear relaxed and candid in a memoir ­– in other words be yourself on the page.  Paradoxically, I worked hard so that the book would be easy to read.  I jokingly express my writing formula this way:

You started out writing it as a novel and then turned to memoir.  Why? And what was different about how you approached each genre?

I discovered drafts of a novel I was trying to write many decades ago about the events in the memoir.  I was young, in my mid-twenties, and had no idea what I was doing.  But it was a beginning, and I did use some of the descriptions and dialog from that early novel in my memoir.  It would require a change in genre (from novel to memoir, which I think works better) and the magic elixir of time and experience for my (very bad) novel to evolve into the memoir it was meant to be.

You’re an accomplished and prolific picture book writer.  Share a little about that.  How hard is it to leap from writing for kids to writing for grown-ups?

I’m a kid at heart and writing always feels like playing to me (though sometimes that play is darn hard work!) so writing chapter and picture books for kids, while also writing for adults doesn’t feel like a leap.  Also for some mysterious reason, I write only fiction for children and only nonfiction for adults, so each genre occupies its own special sphere.

You cover some pretty wild stuff that happened to you in your earlier years.  Did you worry about your family (especially your daughter) reading these parts? This is such a common fear among memoir writers.

Yes, I worried a lot!  And I left out a lot, too that didn’t serve the narrative and might have hurt the people I was writing about, if they happened to read it.

My daughter, who is twenty-one now, seemed to have no problem with the memoir, which I was relieved about.  However, I did warn her before publishing it that I was writing about some events she might find shocking.  When I told her what they were, she looked relieved and said, “Oh, I thought you hurt an animal or something!”  That made me laugh and I can promise readers I did not hurt any animal – except a giant water bug I flushed down the drain in one scene.

I’d love to hear a little about how you found your publisher.

This was a long process of submitting to agents and publishers over several years, but I think it was only in the last few months of submitting that I managed to polish my query to a high shine, and clearly articulate the theme of my story.

Allow yourself to write ramble in early drafts, and write badly.  As Woody Allen said, “that’s why God invented the word rewrite.”

What are you working on next?

I’m working on children’s books and a travelogue about the three years my family and I lived in Florence, Italy.  The subtitle is “No One Feels Sorry for You When You’re Living in Tuscany,” which is true!

I’ve seen many novels and memoirs in writing groups or workshops that looked hopeless at the time ultimately evolve into publishable books. Tell yourself giving up is not an option, and if there’s something wrong with your story, don’t despair.  You can always  fix it!

Pamela Jane has published over twenty-five children’s books with Houghton Mifflin, Atheneum, Simon & Schuster, Penguin-Putnam, Harper, and others.  Her books include NOELLE OF THE NUTCRACKER illustrated by Jan Brett, and LITTLE GOBLINS TEN illustrated by NY Times best-selling illustrator, Jane Manning (Harper, 2011). The sequel, LITTLE ELFIE ONE has just come out (Harper).  PRIDE AND PREJUDICE AND KITTIES: A CAT-LOVER’S ROMP THROUGH JANE AUSTEN’S CLASSIC with coauthor Deborah Guyol was featured in The Wall Street Journal, BBC America, The Huffington Post, The New York Times Sunday Book Review and The Daily Dot, and has recently been issued in paper. Pamela is a writer and editor for womensmemoirs.com, and has published essays and short stories in The Philadelphia Inquirer, The Antigonish Review, and Literary Mama, .  An excerpt from her new memoir, JUST WAIT! A Short Story Rejected in Grade School Becomes a Cause in Action appeared in the March issue of The Writer.