When I arrived to meet with a client yesterday, she looked sad.  "What's going on?" I asked. 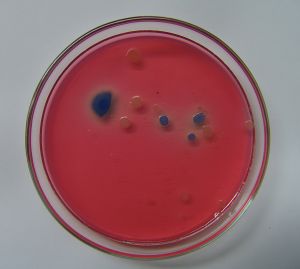 And so I proceeded to question her about what she'd been doing.  Turns out she had been reading, researching and taking notes on her project like mad.  It was just that she hadn't been writing.  And her lack of actual writing made it feel like she was in the middle of a lull.

When I pointed out that she really was getting work done, she brightened, and allowed as how that might be true.  That while she had not actually been writing, she had been taking in tons of information and allowing it to settle in her brain.

And petri dishes have important roles to play.  As a reminder for those of you who haven't had science for awhile, a petri dish is a small flat-bottomed vessel used for growing bacteria.  (For the record, according to Dictionary.com, it was named after German bacteriologist Julius Richard Petri.)

While most of us do not want to grow bacteria (I've had quite enough of that this week, thanks),we do want to grow books.  Or articles.  Or blog posts.   And sometimes in all our headlong rush to get words on the page, which, by the way, I am the first to encourage, we forget that the cycles of creativity mimic the cycles of nature.  And as such, fallow time is needed.

When I take Buster the ancient pug outside I notice how everything in my garden is dying.  The daisies are going back to seed, and all the other plants are withering and dying.  Leaves on the trees are just beginning to turn color and soon will be falling.  Everything is going back to seed, to the quiet time of winter when things lie still and quiet.

Sometimes we as creatives need to be still and quiet, also.  And yet we resist that call, because it can feel like we're not actually accomplishing anything.

Julia Cameron, in her seminal book, The Artist's Way, reminds us that we need to refill the well regularly.  That we can't expect to continually throw words on the page without somehow replenishing ourselves.  Which is why she recommends regular Artist's Dates, in which you take yourself out to do something you enjoy.  Visit a gallery, hit the bookstore, swing on the swings at the park, take time to paint.  Find a way to refill the well so that you can return to your project refreshed.

Sometimes just vegging out can have the same results.  Lie on the couch, watch nutburger TV, stare at the sky, or putter about the house, looking busy but not really accomplishing anything.  (My Mom was a putterer extraordinaire, and I learned the art at her knee.  Its amazing how relaxing it can.)

How do you renew your creativity?  Do you resist the call to be a petri dish?

*For all of you who have asked, my son is now home and doing well.  Yay!  And thanks again for your good thoughts and prayers.

**Also, the above-mentioned client is doing a cool Moon Soul workshop in November.  For more info, email Glori at ggjarvi@gmail.com.

Photo of petri dish (with E coli growing in it, euw) is by Balder2111.

0 thoughts on “Cycles of Creativity: Being a Petri Dish”