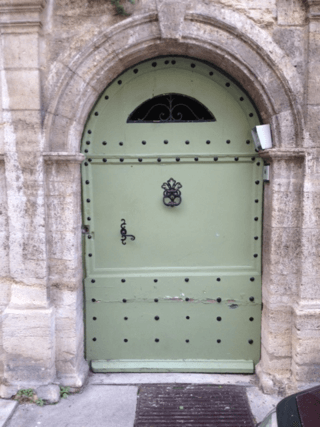 A green door in Pezenas, France. It's a doorway to rewriting, get it?

I started this particular novel last year in late September, and finished it almost a year later, on the last day of August.  By many standards, including mine, that is a slow pace for a first draft.  But there were entire months when I set it aside to work on other projects, so the entire time span of active writing was probably was more like eight months than twelve.

I got the idea for this novel in the shower one day in one of those Eureka moments.  When I started writing, in first person, the voice of the narrator came easily and naturally, much as what happened with my Emma Jean novel.  I love when this happens–you don't have to struggle with voice, it is just there.

My writing group has been enthusiastic about the story, and responses from people who've read the first 50 pages of it in a MFA alumni writing workshop have been also.  And I already have a ton of ideas of scenes I need to add and ways to deepen certain characters. So, I'm excited to get on with the second draft.

I had finished the first draft of the book I lovingly call my MFA novel (It now resides in a cupboard and will likely never see the light of day) and was ready to rewrite it.  So I asked my MFA mentor, an accomplished novelist, writing teacher, and world traveler (who shall remain nameless only because what follows might sound like I'm dissing her and I don't want anybody to think that because she was amazing) how to go about it.

"I'll tell you how to do that," she said, tossing her long, thick, red hair.

I leaned forward, excited for more of her words of wisdom.

"You sit in your favorite easy chair and read your novel as if you're reading a book from the bookstore."

I waited.  Then I waited some more.  Being too in awe of her to squawk, "that's it?" I waited longer.

Finally she broke the painful silence.  "Then you will find a way in."  And she bestowed a smile on me.

So, um, you can see why I'm thrilled that plans for rewriting the novel exist.  And, lord have mercy, said plans involve buying office supplies, like post-it notes! A three-ring binder! 3-hole punched paper! Washi tape!  (Okay, the washi tape wasn't strictly necessary, but how could I resist it?)  I'm in the process of printing out my novel and have already begun following the first part of the plan.

Oh, and today, in my internet travels, I ran across this post from the always helpful Janice Hardy about rewriting.  It's worth a read, also. 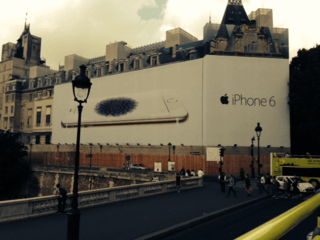 A giant ad for the Iphone 6 on an historic building in Paris.

And now we come to the part about Mercury Retrograde.  Three times a year, the planet Mercury essentially goes backward.  (Don't ask how, just accept, okay?) Most people intone the words Mercury Retrograde with the same dire tones they use to say black plague, or these days, Ebola virus. Communications go haywire, and technology goes bust.  (Don't even think of buying a new computer or phone during one of these periods.  And whatever you do, don't sign a contract.)  Travel plans tend to go awry.  Fun and games, people, fun and games.

There's always a but, and this is a big one.  At the same time all the above-mentioned crazy stuff is occurring, there's something else afoot–and that is that anything that has the prefix "re" attached to it will be a good activity for you.  So, reorganizing, remembering, renewing, or, ahem, rewriting.  Yes, Mercury Retrograde is the perfect time to return to something you've been working on and a good chance to look at it with new eyes.  So there.  I've just given you reason not to dread Mercury Retrograde.  Just don't get tempted by those new Iphone 6s.

How do you approach rewriting?

0 thoughts on “The (Sometimes) Joy of Rewriting”