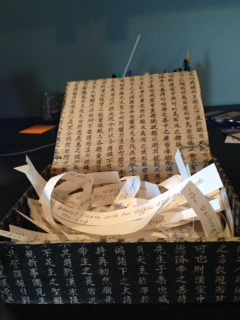 I've been writing again–this morning, 2,000 words in an hour, words that came easily and almost effortlessly.  This, after noodling around, trying to decide which novel idea to pick up next.  (I've got four of them churning around in my brain.)

I'm also a tad bit distracted, because my agent is sending my current novel,The Bonne Chance Bakery out to publishers this week.  No big deal. Not. (I don't expect to hear anything for quite awhile, because one thing I'm learning about this process is that everything takes longer than I think it will.  Sort of like home remodeling.  But I will keep you posted, I promise.)

Anyway, it feels so good to be writing again.  So freaking good.  And for it also to feel like I'm working on a project that is flowing, if you know what I mean.  I've made starts on the other novels and while I have made some progress they didn't quite have the feel of this one–the feeling that the story is right there at my fingertips, that my hands can't range across the keyboard fast enough. I get an idea for something else in the chapter and pause only to make a quick note because I'm going so fast I'll lose the thread otherwise.

That kind of writing.

And guess what? It all came from prompts.  I've written three chapters so far and when I looked back on them this morning I realized they had all started with a prompt.  I'm sort of like the Prompt Queen, because I push them on others so much (including publishing a weekly collection of them here), but sometimes I forget to use them myself.  (The shoemaker's children have no shoes.) But recently, in going through a cupboard in my office, I found a box of prompts I'd made long ago.  I rescued it and stationed it on my desk and I've been pulling prompts as starters for this novel.  Clearly, it's working.

Here are a couple thoughts on the process of using a prompt to make forward progress on a WIP:

1.  Choose at random.  Close your eyes and metaphorically pull a prompt from whatever kind of prompt box you keep.  Or run your finger down a selection of prompts and use whatever one it lands on.  And then don't change your mind!  Just use it!  One of my best pieces–what will likely be the opening of the novel–came from a prompt I hated.  I almost put it back and chose another one, but decided to use it.

2.  Start fresh every day.  I've been easing myself back into writing the next novel.  If I think too hard about it, I freak myself out.  As in, this one has to be better than the last!  Now that I have an agent, everything I do has to be top notch! And so it kinda works better to pretend that I'm just goofing around.  I open a new file every day and I don't call it anything like a chapter.  I label it Daily Writing and then the date.  Then I write the prompt and go for it.

3.  Use prompts from previous writings.  (Can't call them chapters, remember.)  This morning I used the last line of the previous day's work.

4.  Let your brain wander where it will.  That's the beauty of prompts–yours may be about flowers in the garden and you end up writing about sailing on the sea.  That is a little less likely to happen when you're attempting to make forward progress on a long project, but your hands may still take you unexpected places.  Let them.  Those often turn out to be the jewels.  And God invented the delete key for those times when they don't.

5.  Do timed spurts.  I'm still a huge believer in this.  Set your phone timer for 30 minutes and when it goes off, get your ass up and take a stroll around your office.  Or do a couple lunges.  Or stretch.  It's important to get up.  When things are not going well, 30 minutes seems like an eternity and when I'm done, its, yay, now I can quit.  This morning, I promptly (ha!) thought, I'm going to do another one.  And then another.  2,000 words later I was a happy writer.

I think I'm going to add some prompts to my prompt box, maybe cutting up old manuscripts or cutting out lines from magazines.  I like having it sitting on my desk because then I, um, remember to use it.

So, I've probably asked you this before, but what the heck, I'll do it again: do you use prompts for your writing?

0 thoughts on “Never Underestimate the Power of a Writing Prompt”